In response to the Democrat's criticism of President Trump military targeting of a leader of a terrorist organization in a country, Iraq, where there is already a congressional authorization for military action and, specifically, to the Democrats saying Trump needed to get a congressional authorization in order to kill General Soleimani, clever lawyer John Hinderaker had this to say:

Did I forget the time when Barack Obama sought Congressional authorization to kill Osama bin Laden, the proudest moment of his presidency? Or have I forgotten how Congressional Democrats lamented the absence of a vote?

I now expect constant hypocrisy from the left, but their automatic anti-Americanism still galls me. Any rational person of ordinary historical knowledge knows this strike against America's enemies was a good thing. 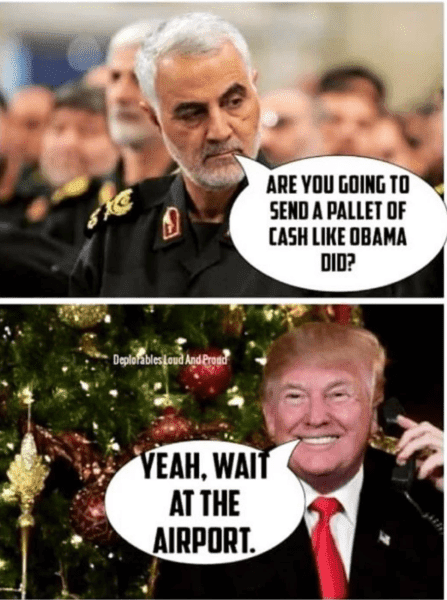 Comments:
Their (the Dems) warped priorities disgust me. They have amply demonstrated that they will sacrifice anything & everything to promote their own political aggrandizement: their patriotism, their honor, their honesty, ...any pretense of consistency of principle (and obviously, this is not an exhaustive list, just what came off the top of my head.)

FYI, Dan Bongino has an interesting interview with Guiliani -- some info re: Biden family that I had not known.
Video is +/- 30 minutes. Intro & ads end at about 4:15 mins.

Thanks, I like Bongino. I'll take a look after work today. Obviously with you on the other things you wrote.