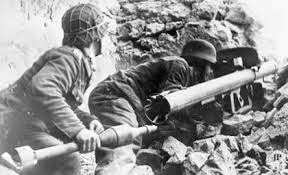 German Soldiers in WWII with their copy of our bazooka called a Panzerschreck (real name Raketenpanzerbüchse, RPzB for short). Theirs was bigger than ours (88mm v. 60mm) but they both fired the same solid rocket propelled HEAT round (high explosive anti-tank) with a shaped charge to cut though armor with directed explosive force (via a hypersonic stream of molten copper, usually). The problem with these was the solid rocket fuel burning pushed very hot exhaust out the back to power the warhead out the front. Unlike an RPG (or the Panzerfaust, kinda), which blows the warhead out of the tube before it fires up its rocket propellant, these push the hot exhaust behind and in the front as it leaves the tube. That is, the hot exhaust goes right in the operator's face. That's not so good. Here they put a shield with a viewport so the soldier keeps his face intact using the weapon. Nobody uses these anymore, but they had their day and knocked out a lot of armored vehicles and fortified points of resistance. The Germans manufactured about a quarter million of them in the last 2 years of the war.

I watched all of the Showtime series Years of Living Dangerously. Not many people did because it was boring and tendentious, but I persevered. I am a luke-warmer on global warming and I remain completely open to being convinced that the slight warming of the troposphere our burning of fossil fuels is causing is actually a catastrophe in the making. More recently, in that vein, I watched the first episode of the new season of a series on HBO called Vice. My guess is they named it that in the hope some people surfing the channels would think it was just another of the late night soft porn shows most of the premium cables show and start watching it. Lord knows if they called it Liberal Propaganda, an accurate title, they would chase away many.


So how can I call it propaganda? They have scientists and stuff.


Let me count the ways:


1) The whole of their presentation is an argument to authority. Scientists believe this so who are you, ignorant peon, to disbelieve? But, as I've said here before, scientists have believed things in the past that were wholly wrong, so it was a good thing some ignorant peon challenged the settled science and disproved it. I won't have to go back to the time of the Crusades, as our president does from time to time. More recently that that, after the Copernican revolution, beginning in 1543, the settled science that all the heavens revolved around Earth had changed to the accurate belief that the sun was the center of our system of planets. I am old enough that I have seen two sets of settled science change 180 degrees in my lifetime. First, when I was born the idea that continents moved was completely wrong, but in the 60s it became complete scientific truth. Second, settled medical science was that peptic ulcers were never caused by a microbe in the stomach but by stress and the wrong foods. After proper Nobel prizes were awarded in 2005 the settled medical science was that most peptic ulcers were from the microbe helicobacter pylori and hardly ever from anything else.


2) The ad hominem attacks on those following scientific principles and questioning the so-called settled science follows hard on the argument to authority. In short, the skeptics don't have to be engaged in debate because they are all liars for money, and stupid to boot. Those alleging this calumny never mention there is little money given to the skeptics, generally none, and it is wholly overwhelmed by the billions of dollars the government gives the true believers in catastrophic anthropogenic global warming. The fact that several of the skeptics are the greatest scientists of our time is not mentioned. What is mentioned from time to time is the Koch brothers. I believe this is the greatest poker tell for liberal bias ever. What actually does the Koch brothers' charitable giving have to do with the accuracy of climate models? Let me be so bold as to answer that for you, nothing, nothing at all.


3) Then there is cherry picking of data to support the claims that anthropogenic global warming is going to be terrible for everyone. In the Vice episode I watched, the focus was not on the whole of Antarctica but on two tiny ice shelves on the west coast of the Antarctic peninsula, on about one half of 1% of the continent's total area of ice shelves. And, mirabile dictu, the area they picked, around the Pine Island Glacier, has been melting. Golly Gee. What about the other 99 and 1/2% of the ice shelves? What is the net melt for the whole of the continent?* Whenever there is a very localized melting like this, I always wonder if there is an active volcano under the ice. Is there one under the glacier in question? Why yes there is. Is it active? No one seems to know. Is the water around Antarctica warming generally? No, just in this area, along the Antarctic Peninsula. In fact the Antarctic sea ice extent has set records lately and has been above "normal" 100% of the time for the past 6 years. Difficult to believe that the surrounding ocean is warmer but the sea ice is greater in area and volume (of course the Vice people do believe just that and had the lamest of excuses for why the sea ice area and extent have been increasing. On the other side of the world, in the Arctic, where the sea ice area is shrinking and is generally well below "normal", there is no doubt that this data is proof of global warming. I wish I could think up a theory where everything, even opposites, supported my theory, but I'm not smart enough).


4) Then the propagandists give wild, impossible to believe prediction, always of doom and gloom. Here the melting of the one half of one percent of the Antarctic ice shelve is predicted to cause a three meter rise in sea level very soon but certainly by 2100, less than 85 years away. Hmmm. That sounds bad. But is it likely or even possible? Let's look at the past. The tide gauge record of ocean rise in the 20th C. was at a rate of about 2mm/yr. or 7.9 inches per century. We have more sophisticated systems now, two methods of satellite measurement in fact. One of them gives a rate over 3mm/yr. (The other gives a rate of 1.7mm/yr., similar to the tide gauges), but let's go with the settled science of 3mm/yr. In a century that would mean the sea level would rise 11.81 inches. The show however talked about a 3 meter rise in ocean level if the melting continued. The host talked about 10 feet in 3 to 5 years. Absurd. Let's get a little more real. To get to that height (or is it depth?) approaching 10 feet in the remaining 85 years of this century, the rate would have to be 34.2 mm each year, or 10 times the rate the settled science produces (which a lot of people believe is too high). And every year it is in the range of 3mm/yr., means the rate for the remaining years of the Century will have to be ever higher to make up for the slow start. Is there any evidence that the rate of sea level rise is accelerating? After all, 3mm/yr. is greater than last century's 2mm/yr. But lately, the rate of rise has decelerated with the change to the Jason system measurement from the Topex system. So the rate of change is going the wrong way.
There, now you don't have to waste your time on this.

Income Inequality is an Unqualified Good

Because it is proof of freedom, the inevitable income inequality in America, which any single moment in time reveals, is the furthest thing from a crisis or problem. And, again because of freedom, things change. Behold:


And despite America's lousy government schools and regulations that make it tough to start a business, there is still economic mobility. Poor people don't have to stay poor. Sixty-four percent of those born in the poorest fifth of the U.S. population move out of that quintile. Eleven percent of them rise all the way to the top, according to economists at Harvard and Berkeley. Most of the billionaires atop the Forbes richest list weren't rich. They got rich by innovating.
Rich people aren't guaranteed their place at the top, either. Sixty-six percent fell from the top quintile, and eight percent fell all the way to the bottom.

You know that there are very real problems out there to worry about but the freedom to succeed or fail economically is not one of them. Get your priorities right, lefties.