Note to Jews who voted for Obama: You Own This. If the bomb drops on Israel, you were a big part of the reason why. Knowing full well that Obama has deep ties to the antisemitic Left (Jeremiah Wright!) you insisted that it was not true, that it was racism to point this out, that America has and will always have Israel’s back, ad nauseum. Now that there are no more elections for Obama to win, he is letting his Jew hatred shine.

Labels: Idiot Jews Who Voted For Obama; Obama Free to Be Obama

The ecoblogs and ecosites are full of dire predictions about the number of animal and plant species going extinct each year. Of course these tree hugger organizations only exist in order to gin up concern for Nature so even natural rates of extinction would upset them. So there's that bias.

And the numbers vary. By a lot.

WWF says 10,000 species are going extinct each year. The Center for Biological Diversity says it's "literally" dozens per day. The National Geographic Society says its between "100 to 1,000 species lost per million [species] per year, mostly due to human-caused habitat destruction and climate change."

They just have a lot of trouble naming any.

In fact, the International Union for Conservation of Nature says, "only one animal has been definitely identified as having gone extinct since 2000. It was a mollusk."

Here is a sobering number (for them) from the newspaper of record, the NYT. Here is the money quote:

Species began going extinct at a much faster pace. Over the past five centuries, researchers have recorded 514 animal extinctions on land. But the authors of the new study found that documented extinctions are far rarer in the ocean.
Before 1500, a few species of seabirds are known to have vanished. Since then, scientists have documented only 15 ocean extinctions, including animals such as the Caribbean monk seal and the Steller’s sea cow.

The real trouble is that we don't know how many species there are (or what is the natural rate of extinction, for that matter); so talking about a set percentage of loss of species by 2040 or 2100, for example, is nonsense.

Muslim terrorists in Syraq (or is it Iraqia?) post a video showing a child hacking off the heads of two prisoners, and Obama says no mas:


Yesterday, President Obama announced that he is challenging the federal government to remove all unnecessary regulatory barriers to broadband build-out and competition, and is establishing a new Broadband Opportunity Council. The council will bring together more than a dozen government agencies with the singular goal of speeding broadband deployment and improving access in areas that need it most.

It’s like he’s in a different movie. It’s one thing to not say the phrase “Muslim terrorists”, but to pretend that they’re not there? Setting aside any value in his proposals, aren’t they a little weird in context of daily headlines? Don’t they come from an alternate reality?

Here are some photos of one of the weapons carried by the French National Police in the big Musulmanhunt a few days ago. At first I thought they carried the Little Brown Rifle* by Ruger, aka the Mini 14. 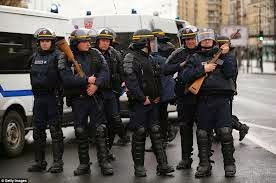 But on closer examination, I see they're carrying the Ruger AC556, a full auto version of the Mini 14.
The French have also upgraded the wooden stocks usually sold by Ruger. The gun is still in the awfully underpowered .223 (5.56mm on the continent) but it's cool that they're using American weapons. 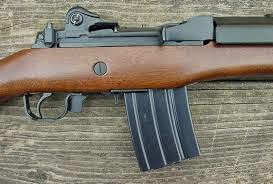 The little do hickey near the back end of the receiver (right above the trigger) on the top of the wooden stock.
That's a selector switch. Up (the position it's in now) is semi-auto. Halfway back is three shot burst. All the way back is full auto.
I have to say I like the uniforms too, with the plastic greaves and the retro looking shoulder upper arm overlapping plastic plates. Looks a little like Japanese armor.
* The Mini 14 is one of the weapons that reveals the assault weapon ban to be the sick joke it was. The Mini 14 uses the same rotating bolt as the M-1 Garand and the M-14, its superior cousin. It shoots .223 from removable box magazines of various capacity. Many use the dreaded thirty rounders. It has the same firepower as the AR 15 (and its lookalikes and progeny) but the Mini 14 has never been banned nationally and the only reason is that it has a wooden stock and looks therefore not as mean and military as the all plastic and steel ARs. That was the only difference between the banned and non-banned, how they looked. Pathetic.﻿


That Karma is one tough mother, right?

Here is columnist Eugene Robinson, making sure to criticize America, as he comments moronically about the recent Muslim murder spree in Paris.


Just to keep it into perspective, I don't think we should imagine that the conditions and the threat are exactly the same in the United States as they are in France. They are different. In fact, one thing that is different here is weapons are universally available and so it is actually a very good thing that, that the tensions are not exactly the same because we would expect to have a lot more carnage. (Emphasis added).

Let's review what weapons the Muslim mass murderers used: Two full auto assault rifles, probably AK-74s, a pump shotgun (for close encounters) and a rocket propelled grenade launcher (probably a Soviet RPG-7, but accounts vary and it could have been an RPG 18 or 22).


There may be a few full auto AK-47s in the United States. For one to own one legally, it would have had to have been imported before 1968 and there were darned few AKs being captured by us before that time. The Russians had them, of course, but the other commie nations not so much. They became more common in Viet Nam after the import ban. So our "universally available" weaponry here in America would not likely have included full auto AKs. It is much easier for Europeans willing to break the strict gun laws that exist over there to obtain full auto AKs. It is the most produced assault rifle ever, with perhaps 100 million in existence; and they were the main weapon of the armed forces of the European countries behind the Iron Curtain and there are plenty still around. So, no, Mr. Robinson, the particular assault rifles used were much more "universally available" in Europe than here.


How about the RPG? Well, again, they are almost non-existent in the US but are all over the place in Europe. Although the RPG-7 was developed in 1961, the Soviets kept them pretty much exclusively in mother Russia for quite a while. Now they are as common as mice throughout Asia and Africa and Europe, but are not at all a common weapon here in the carnage-waiting-to-happen United States.


So no, blame America firsters, we wouldn't expect a lot more carnage here. Perhaps a non-Muslim terrorist citizen in France with a lawfully concealed carry weapon could have taken out the murderers before they entered the newspapers office. But there was no chance of that as there are no lawful citizen concealed carry permits in France. The French government forbids the public arming for self defense so the Parisian public was sheep to the Muslim terrorist wolves. How's that gun control legislation working out for you, mon ami?


And don't even get me started on the Gendarmes sans pistolet.

Old Liberal: I may disagree with what you say, but I will defend to my death your right to say it.


New Liberal: If Muslims disagree with what you say, I will defend to your death their right to take offense.