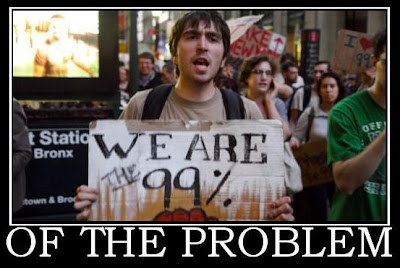 It all depends on the Frame.

Here is the text of the permanently campaigning President in Asheville, NC yesterday. Here are some quotes with my responses thereto:

So, those are the choice that members of Congress are gonna face in the coming weeks. And if they vote against these proposals again; Like I said maybe they didn’t understand the whole thing. [Yeah, it's the Republicans who are the stupid ones. Who don't know that?] So we are breaking up into little pieces. If they vote against taking steps that we know will put Americans back to work right now. [We know no such thing. The pitiful few jobs the near trillion dollar Stimulus created were too costly. We just don't have the money to waste anymore] Right Now. Then they are not going to have to answer to me; they are going to have to answer to you. [I'm ready to answer]

They are going to have to come down and explain to you why they don’t have an answer as to how we are putting Americans to work right now. [Number of Americans employed when Obama was inaugurated: 142,201,000. Number of Americans employed now: 139,627,000. Who's putting Americans to work right now?] And if they support the Republican plan, if they were to support the Republican Plan they will have to explain to you why {they'd} rather deny healthcare to millions of Americans [Not deny, just not pay for those who choose not to get it. Because we don't have any money for that] and let corporations and banks write their own rules [At least those rules would allow businesses to prosper and hire more people] instead of supporting proposals that we know will create jobs right now. [Businesses create real jobs not the Government, the only thing the Government can do is help to create a business climate conducive to hiring, something Obama and his advisers know nothing about].

This is pathetic stuff from the President. And sad.

It seems all is not sweetness and light at the Occupy Wall Street compound. There are those among them who do not respect property rights. Just imagine!

Occupy Wall Street protesters said yesterday that packs of brazen crooks within their ranks have been robbing their fellow demonstrators blind, making off with pricey cameras, phones and laptops--and even a hefty bundle of donated cash and food.

"Stealing is our biggest problem at the moment," said Nan Terrie, 18, a kitchen and legal-team volunteer from Fort Lauderdale.

"I had my Mac stolen--that was like $5,500. Every night, something else is gone. Last night, our entire [kitchen] budget for the day was stolen, so the first thing I had to do was . . . get the message out to our supporters that we needed food!"

It's not as much fun when someone spreads your wealth around to others.

Taking the Rough with the Smooth

IDF member, Gilad Shalit has been freed from 5 years of captivity through a "prisoner exchange" where 1027 Arab criminals were released for one Jewish soldier.

I'm generally against these exchanges, as it rewards what amounts to the kidnapping of Israelis by their enemies. It is negotiating with terrorists--a bad idea per se. Criminals released early also have a horrible effect on the releasing society in that justice is not served here hundreds of times (a thousand plus times) over.

The one ray of silver lining is that we now have a concrete example of the relative worth of Jews versus Arabs.

The latest article in Joe Romm's Climate Progress reaches a new intellectual low which is difficult with all the competition on that site for the title. The claim is made that if the US was foolish enough to install solar at the same rate as the Germans then it would be a 100% solar utopia by 2026 with everyone's home completely powered by renewables except on cloudy days and at night and in the mornings and late afternoons. We could all pretend that the new fossil fueled power stations running 24/7 as backup don't exist in this Romantic Green wonderland of the future. We could also pretend that the crippling cost of this part-time energy is OK because it is "green" and anyway the US can borrow heaps more dollars from China for such a good cause and avoid using all that cheap coal like the silly Chinese are doing. (Emphasis added).

Springtime for Hitler - The Producers(1968)

Brevity is the Soul of Wit

Apparent past winner of the All-England Summarize Proust Competition, John E, is also this year's winner of the contest to give as concise a history of the Obama Administration as possible. Ready?

Actually he's probably only talking about Operation Fast and Furious.

Indeed, the very women’s groups most exercised about [Justice] Thomas’s alleged misconduct were notably, shamefully silent when it came to Clinton’s behavior with a White House intern and his false statements under oath.

Obama Presidency by the Numbers

Putting Two and Two Together

Here is an account by young Ben Shapiro about what the real reason was for Operation Fast and Furious (and a "straight" report on if from CBS).

According to the Congressional report, "ATFs Phoenix Field Division began allowing suspects to walk away with illegally purchased guns .... This shift in strategy was known and authorized at the highest levels of the Justice Department." One goal was to identify "straw purchasers" -- legal gun purchasers who hand off those guns to illegal owners. Instead of arresting the straw purchasers and their contacts, however, ATF was to allow the guns to continue to flow to the Mexican drug cartels. "ATF and DOJ leadership were interested in seeing where these guns would ultimately end up," the report states. "ATF would only see these guns again after they turned up at a crime scene."

That's exactly what happened. The entire operation ended with only 20 indictments of straw purchasers -- indictments that could have happened immediately upon transfer of the weapons, stopping the flow. In fact, the straw purchasers, at issue, were known to be straw purchasers from the get-go. The indictments only took place at all because U.S. Border Patrol Agent Brian Terry was murdered using the weapons authorized for free flow by ATF and DOJ. Terry wasn't the only person killed because of Fast and Furious -- the weapons OK'd by the DOJ and ATF were used in three murders, four kidnappings and an attempted murder in Mexico. They've been identified at 11 other crime scenes in the United States.

So what was the real goal of the DOJ and ATF? It certainly wasn't to shut down access to arms for the cartels -- the ATF was agreeing to such access. It wasn't to stop straw purchasers -- the ATF was signing off on the straw purchasers. It wasn't to track the movements of the cartel -- there was no way to do that. It was, very simply, to establish for political reasons that American guns were being used in crimes by foreign cartels.

This was the Reichstag fire of the Second Amendment. By authorizing the passage of weapons to America's enemies, President Obama and his administration clearly wanted to set up a narrative that America's lax gun laws were killing American troops and law enforcement officers. They wanted their misuse of law enforcement authority to create the impetus for a crackdown on gun sales in the United States.

Now here is a report from May of this year:

On March 30, the 30th anniversary of the assassination attempt on President Ronald Reagan, Jim Brady, who sustained a debilitating head wound in the attack, and his wife, Sarah, came to Capitol Hill to push for a ban on the controversial "large magazines." Brady, for whom the law requiring background checks on handgun purchasers is named, then met with White House press secretary Jay Carney. During the meeting, President Obama dropped in and, according to Sarah Brady, brought up the issue of gun control, "to fill us in that it was very much on his agenda," she said.

"I just want you to know that we are working on it," Brady recalled the president telling them. "We have to go through a few processes, but under the radar."

What's that phrase? oh, yeah, What did the President know and when did he know it? God, I miss those dark, dark days of Watergate which resulted in death and injury to zero people. So far the death toll for this idiotic scheme by the BATFE, etc., includes several Americans, some in law enforcement and an unknown amount of murdered Mexican citizens. Of course, Watergate was much more important, a clear and present danger to the viability of our Constitutional Republic as a nations of laws, not men.