Europe long ago gave up fighting for or believing in anything other than living a life with as much economic security, as many days off and as young a retirement age as possible. World War I killed off European idealism. And whatever remained was destroyed by World War II. What I have written about the Germans is true for nearly all of Europe: Instead of learning to fight evil, Europe has learned that fighting is evil. 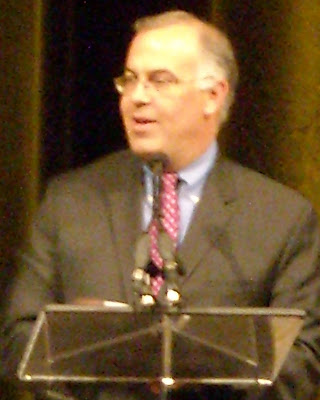 Went to hear David Brooks, who passes for a conservative on the NYT editorial pages. It was to support creation of the Tim Wirth chair at some sort of lefty training ground at UCD.

The mayor spoke first and for a long time as Governor Bill Ritter was delayed "putting out a fire" on the last day of the legislative session. (Indeed the Governor never showed.) I can't shake the feeling that Hickenlooper will be difficult to beat in November, more difficult than Ritter, a feeling apparently shared by Ritter himself. 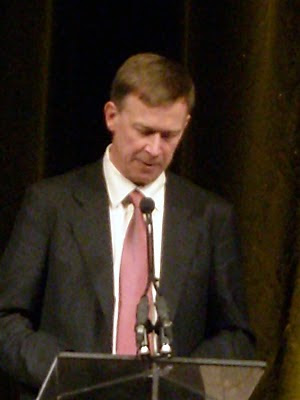 Then Tim Wirth spoke, and all I can remember is his effusive praise of the totally unrealistic, diminished carbon emission goals the Democrats have set for the state as part of the "No Energy Economy" which will apparently rely on expensive, intermittent sources like wind generators and photovoltaic arrays. Oh, along with greater use of natural gas, which is good. How long was Wirth our Senator? Just one term apparently, before he moved on to Global Affairs in the Clinton administration and some good work with the UN since. He's a big Warmie True Believer and thus wasting tons of money and driving off jobs in support of inadequate and unnecessary alternative energy is seen as good by him. 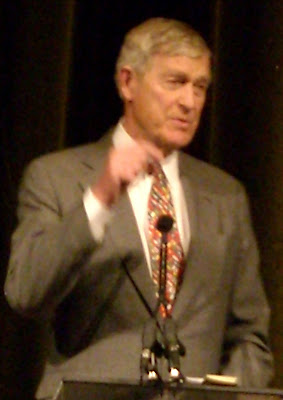 Brooks is a very pleasant fellow who can flat out tell a humorous story and he has the same sort of ability to see the core of some human truths that Jerry Seinfeld has. But he really thought, thinks, that Barack Obama is cool and so it is a series of painfully pulled punches he now throws at the current administration. I usually praise those who can actually see and articulate the bleeding obvious but it's as if Brooks knows that continued effusive praise will just alienate his audience (at the NYT--his audience at the dinner last week was very much in full Obama support mode).
He just can't seem to make the adjustment in his head (scales falling from eyes?) to walk back the position he took during the election when he was, in my view, totally duped.

But that's not the weird part. There was a guy there, I think I recognize him as a fellow lawyer, who still had the store security tab on his jacket. What's up with that? 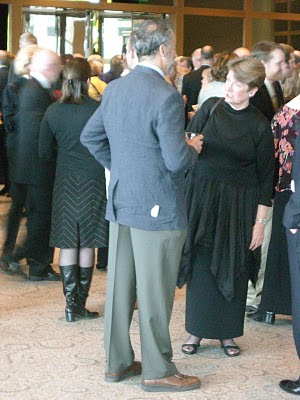 True, candidates like Mrs. Lincoln and Mr. Specter are struggling against today's anti-incumbent, anti-Washington fever. But the primary challenges are also the result of mismanaged expectations. Barack Obama allowed the left to believe he was one of them. Some of his campaign promises certainly fed its hopes: He'd close Guantanamo, pass union "card check," renegotiate Nafta, leave Iraq. Adding to the left's exuberance was the party's filibuster-proof Senate majority.

But Guantanamo is still open, card check is still dead, Nafta is still functioning, and troops remain in Iraq. Meanwhile, the president dangled the public option in front of his liberal supporters, only to further enrage them when he lost that fight. All this has forced Democratic congressmen to take the blame for failures like card check.

Get up, Peter, kill and eat.

May 1--the Co-opted Cross Quarter Day

I've written about cross quarter days before here. They are the days halfway between solstice and equinox. You can certainly see some psychological aspects of the differing ones. Take, for example, February 2, now denigrated to a hack binary divination from a marmot. But what are we worried about halfway between the beginning of Winter and the start of Spring? Certainly the main one for early people is how long will Winter last? It is just as easy to see that halfway from the end of Summer to Winter, on November 1, we would be worried about the death of all things so we make that all Souls day, and follow it with the day of the dead (and in modern America, the emphasis is on dressing up and extorting sugar from neighbors.)

But what is May 1st about? It used to be sex, the Maypole is a phallic figure. Ancients used to go out and copulate in the fields to "teach" the plants what to do. I recall a very good episode of Rome on the subject. But now it's Commie day (and believe me, I miss the tank and missile parades through Red Square in Moscow). The change, I find, is just weird. Sex to Communist. Who could have foreseen that?

And Mid-Summer (August 1)? That's just gone missing (subsumed here by the Independence day celebration) with a tantalizing look at its ancient roots contained in Shakespeare's play containing the name of the day. 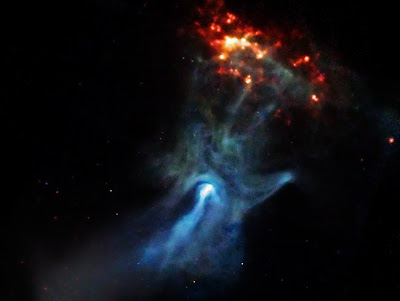 PSR B1509-58, a 20 kilometer wide pulsar spinning 7 revolutions/sec. powers this false color image that spreads across almost 100 light years. It is 17,000 light years away and is really the remnant of a supernova explosion. The pulsar is in the blue white area just below the palm. Blue is high energy, green is low, and red is X-ray radiation.