I Laughed Out Loud 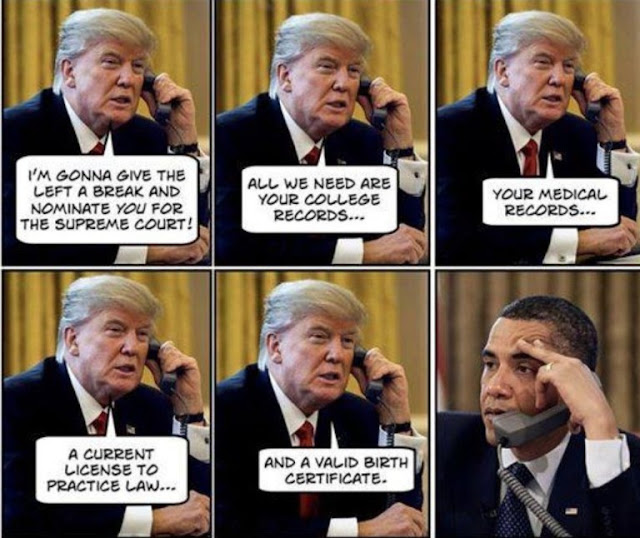 Oh, there’s plenty of big talk among Dems and their media Schumer-sniffers about the onrushing blue wave, but where is this wave? Where is it hiding? Where is there any indication that the people who elected Trump are going to say “Yeah, I like the tax cuts and the booming economy and beating ISIS and my kid not having to fight street-to-street in Seoul and the crackdown on illegals and the conservative judges and Trump generally not taking of guff from liberals and their media pets, but I’ve suddenly just realized that Trump can be mean sometimes so I’ll vote for Democrat guy who wants to help Pelosi take my guns, import MS-13 into my neighborhood, and then pester me at the Arby’s.”

Where is someone saying that? Where?

Just look how unhappy the libs are. It’s all outrage, all the time. You can’t be happy if you are constantly agitated. It’s unhealthy. It makes you look like a wacko. Yet they go nuts on social media, they go nuts at awards shows, and they go nuts when conservatives are trying to scarf down some tacos. If you are always going nuts, maybe that’s an indicator that you are nuts. 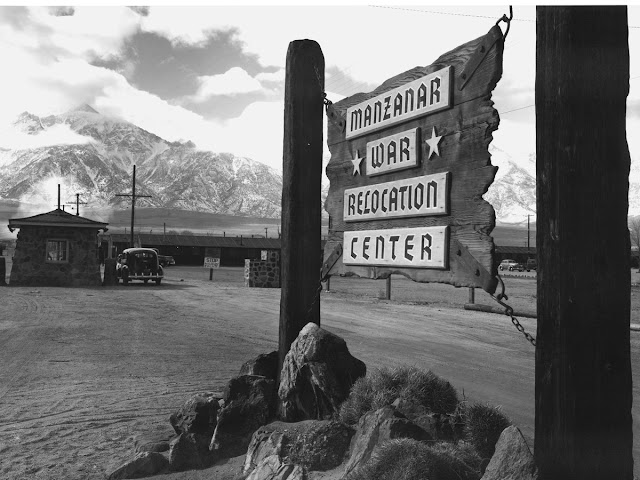 This may turn out to be unpopular but this forgotten information should be presented. File this under speaking truth to power.

Here is the long-on-outrage-short-on-logic New York Times on the recent Supreme Court decision on the President's travel "ban" (v 3.0) in which the majority had read 8 U.S.C. § 1182(f) and the dissent apparently had not.

It’s no small paradox that the justices chose Tuesday’s ruling to formally overturn, at long last, one of the greatest abominations in the court’s history, Korematsu v. United States, the 1944 decision that upheld President Franklin Roosevelt’s order to lock up thousands of Japanese-Americans for years based on nothing but their ancestry — and based on a fabricated claim that our national security demanded it.

Let me introduce today's history-ignorant polemicists to the ghost of the NYT past, all the way back to 1983 when the reporters were coherent and knowledgeable about WWII history. We should never have revealed this, but, during WWII, we broke the German and Japanese codes and they did not break ours. So we knew what HQ in Tokyo was transmitting to the West Coast shortly after the war began. Although, then as now, we could only pinpoint the location of radio transmitters and could not find out who was receiving their transmissions. Here is what was being sent.

"Anyone reading this flow of messages during 1941 could easily conclude that thousands of resident Japanese were being organized into subversive organizations,'' Mr. Lowman said. ''Today we know that the Japanese Government misjudged the loyalty of Japanese Americans completely. But at that time no one knew for certain."

Only a few messages among the many hundreds reprinted in the Defense Department Magic study deal directly with the question of Japanese Government efforts to mobilize ethnic Japanese within the United States for intelligence purposes. However, hundreds of the cables contain espionage reports without citing the identity of the persons who furnished the information.

A cable from the Tokyo Government to its Washington embassy, dated Jan. 30, 1941, asked the embassy and Japanese consulates to arrange for ''utilization of our 'second generations' and our resident nationals.'' But it added, in parentheses, ''in view of the fact that if there is any slip in this phase, our people in the U.S. will be subjected to considerable persecution, the utmost caution must be exercised.''

On May 9, 1941, the Los Angeles consulate sent Tokyo a message marked ''strictly secret'' that seemed to assert that cooperation was being obtained from some ethnic Japanese.

So we knew transmissions to cause saboteurs and spies to arise on the West Coast were being sent from Imperial Japan, but we did not know who was receiving them. What to do to prevent sabotage on the West Coast? (The Germans were meanwhile planting sabotage on on the East Coast, although the FBI was competent back then and prevented it).

The solution was to move all the Americans of Japanese descent out of the West Coast. Certainly a harsh solution to an actual problem, but the worst thing ever? Hardly. And I can think of 8 Supreme Court cases much, much worse than Korematsu.

I would dearly love to join with those bashing the Democrats for their racist, groundless, horrible internment of the Japanese-Americans, but I know too much to do that.

There were German-American and Italian-American citizens interred as well on the East Coast, but not as many as the Japanese-Americans.

We won that war.

Despite an overwhelming bias against those on the right, this article in the New Yorker, is quite good; long, but good. If you have the time, you should read it. If you can't, I'll try to take on the problem the author thinks he's discovered. It's generally about blocking right wing speakers from Free Speech Movement U Cal Berkeley. From the big finish of the article, otherwise pretty rich in common sense from the likes of Carol Christ and Erwin Chemerinsky:

But I don’t think it’s beyond us to say, on the one hand, that everyone has a right to express their views, and, on the other hand, that a political provocateur may not use a university campus as his personal playground, especially if it bankrupts the university. At some point, when some enormous amount of money has been spent, it has to be possible to say, O.K. Enough.

The author is quoting Wendy Brown, about whom I know nothing.

The central take this article champions is a balancing test: The righteousness of allowing all to speak versus the harm some offensive speech, like the Westboro Baptist Church placards, will cause.

Most of us who have studied the Constitution, paying particular attention to the First Amendment, think that the righteousness of allowing all to speak completely overwhelms hurting someone's feelings. Indeed, that is precisely what the Supreme Court said in Snyder v. Phelps, a recent case upholding the right to make very offensive statements.

The author includes a quote from professor john powell (an ee cummings non-punctuation, non-capital use fan) that the psychological damage from offensive speech including "stereotype threat and trauma and P.T.S.D." is a much more major concerns than mere hurt feelings.

But that exaggeration of damage (PTSD from hearing Milo Yainnopouls? Please) is at the root of the left's desire to chip away at the First Amendment's protection in order to prevent hurt feelings. The left seem to ignore what good comes from hearing ideas outside your comfort zone, especially way outside it.

But back to Ms. Brown talking about Berkeley's having to pay so much money for protecting the right-wing speakers from violent protesters as a factor to be balanced against the good of free speech. Here's the question the article never covers and which never appears to have even been contemplated by anyone on the left quoted therein.

Why does the left feel it can violently stop the right from speaking? Doesn't that fascist thinking stem directly from lefty teaching, like what you no doubt get at Berkeley? Aren't the left leaning Berkeley types complaining about the current reality, having to pay the cost of physically defending right thinking speakers from lefty violence and the "hecklers' veto," which reality is a direct result of left leaning Berkeley types' advocated ideas? That's some non-Alanis Morissette type irony, right there.

I'll leave the last word for Candace Owens, whom I'm beginning to like a lot lately, responding to an unsuccessful attempt to silence her:

“Antifa, if you really take a look at their platform, they seem to be the ones that are the white supremacists,” Owens said. “They feel like their ideas are so supreme to everybody else’s that they have the right to boycott, to be violent.”

Funny Because It's True 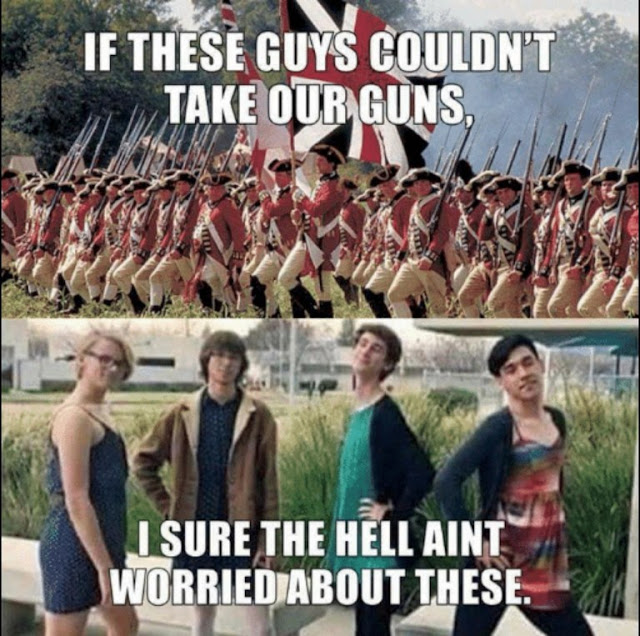 It must be tough constantly pretending to be outraged about legal, humane treatment of people you actually don't care about at all.

Fun fact: International law requires you to seek asylum status immediately upon leaving the country you claim is too dangerous for you to inhabit. Article 31, 1951 UN Convention on Refugees.

Although everyone has the right to seek asylum, there is no right to have that status granted to you.

No civilized nation puts children in the "general population" of an adult detention center (or jail or prison). That would be cruel. 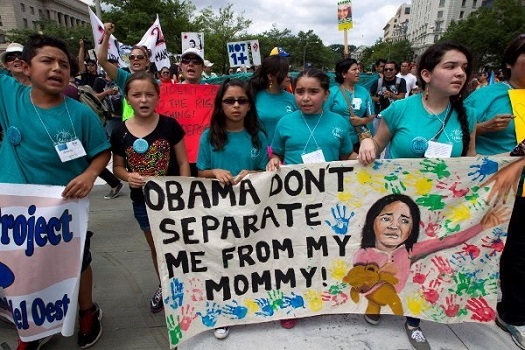 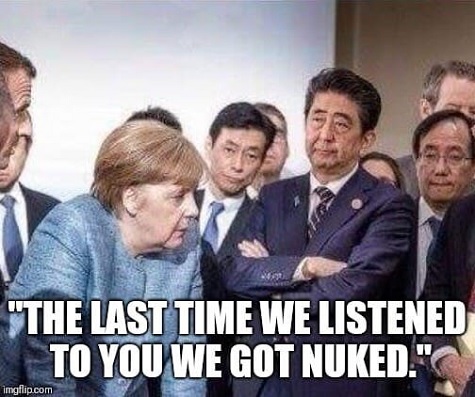 This is Really Good Advice

Here in the magazine The Week is political advice to the Democrats regarding the midterm elections in November by David Faris, an associate poli sci professor at Roosevelt University (which I have never heard of).

It is really good advice. Behold:

This is why it is so critically important that Democrats in Congress recapture their gung-ho crisis attitude from 2017.

No more victories for the president on policy issues that can wait until Democrats are back in charge. No more offhand comments from Chuck Schumer about how great Mitch McConnell is. The president seems to be spoiling for an election-eve immigration fight — give it to him. Raise the stakes. Remind your partisans that we are in the midst of a potentially democracy-ending crisis. Schumer and Nancy Pelosi should be on TV every day warning voters about the president's corruption and abuse of power. Come up with an actual immigration policy that's bigger than the DREAMers. Pick someone to counter the president's daily barrage of paranoid propaganda on Twitter.

The only advice I would add is to talk about Democrat plans for Trump's impeachment, all the time. That will certainly demoralize the mouth-breather Republicans and strengthen the blue wave about to crash down on them.