Like my father before me, I'm a raving Anglophile. But this is too much to bear.

Not only has the United Kingdom abandoned its young girls and allowed them to be systematically raped by Muslim men for years and years (which I believe is a violation of the girls' human rights), but now England is immediately sending to prison ordinary, if somewhat sketchy citizens who dare to talk about the criminal prosecution of these rapists and child trafficking groups. That's a second violation of a human right, the right not to be imprisoned by the government for truthful speech.

Given the fact that the Obama administration openly tried to prevent Israeli Prime Minister Netanyahu's recent re-election, I'm pretty underwhelmed by Russia's attempt to mess with our 2016 elections. Apparently, every country messes with other countries' elections from time to time, almost always to no avail. But letting the young women be raped for years by older Muslim men, because the English authorities were afraid of being called racists, is simply unacceptable. And sending to prison people who want the world to know about the utterly awful things the British government did is almost as bad.

England needs to change its horribly wicked ways and the United States needs to explain to them what constitutes acceptable governmental behavior. Forcefully, and right now.

Here is the English other side (merely trying to give the Muslims a fair trial by no media coverage allowed), which I find totally unconvincing. We handle the "juror contamination by press coverage of trials" not by suppressing the media but by telling the jurors not to watch news coverage of the trial and kicking off the jury those jurors who do and get caught. Much better solution, unless you're the government who has totally failed its young female citizens and you don't want anyone to know that.

Here is Steyn's take, well worth the time reading, as usual.

And the current scandal is far, far worse than Watergate, which, bad as it was, was the coverup of a completely unnecessary buffoon-like break-in during an election that was already won in a landslide. What is being exposed now is an attempt by our highest law enforcement agency working in concert with our intelligence agencies and, evidently, the blessing of the former administration itself to block the candidate of the opposing party, even to defraud and spy on him, that is to, as others have said, "set him up." And then, if they were unsuccessful, make it impossible for him to govern. In addition, in all probability, the same players conspired to make certain that Hillary Clinton was not indicted for a crime for which virtually any other American would have done jail time.

The Rolling Stones Should Sue

There is an exception to your exclusive property right for art you've created; it's called fair use. Write and record a rock song, for example, and another person can play some of it when talking about it. Or a radio show host can play a few bars of it as the opening for his show (Rush v. The Pretenders). But it's generally not considered fair use if your use mocks or denigrates the value of the song or whatever, use by humorists and parodists aside (Amish Paradise is apparently OK).

So the 1968 Rolling Stones' song Jumpin' Jack Flash* has a line, the first line, in fact: "I was born in a cross-fire hurricane." And the members of the semi-pathetic CIA/FBI run kinda sorta coup against President Trump used cross-fire hurricane as their operation name. Our source was the New York Times.

If I were the Stones, I'd sue to make them choose a different name.

*There's another line in the song, like one in Aretha's Respect, which I have never understood. I've listened closely (like Woopie in the fairly shitty movie Jumpin' Jack Flash) a hundred times and I still don't know for sure what Mick sings. The lyric services have decided it's: "I frowned at the crumbs of a crust of bread." Certainly crust of bread is right, but "frowned"? What does that even mean? This is the line between "I was drowned, I was washed up and left for dead, I fell down to my feet and I saw they bled" and "I was crowned with a spike right through my head." One of these is not like the others and "frowning at crumbs" is the odd man out. The whole song is an ever worsening parade of bad to violent to fatal images, what's frowning at bread crumbs doing in there? I'm willing to believe it's the best they could do but, come on, man.

Under the Rubric: Put up or Shut Up

Our democratic project is not threatened if our civil rights laws are interpreted as they were before Barack Obama became president. Nor is threatened by enforcing immigration laws or supporting legislation that would bring immigration levels more in line with historical norms.

Finally, where is the evidence of Russian influence on Trump? Identify the Russian agents who have served in the administration. Show me the policy decisions Trump has made that favor Russia.

The fact is that on nearly all big ticket foreign policy issues — Iran, Syria, Ukraine, you name it — Trump’s decisions have gone against Russia’s interest. And let’s not forget about the expulsion of all those Russian diplomats.

This article in the National Review by former federal prosecutor Andrew McCarthy is extraordinarily good. Do yourself a favor and read it.

May 1 is a cross quarter day, that is, a day halfway between solstice and equinox. The others are February 2, August 1, and November 1. They all have had, to varying degrees, celebrations associated with them.

Some of these celebrations are pretty pathetic. Especially Groundhog's Day. A large marmot can foretell weather for the next 6 weeks or so? That's the celebration? Great movie, though.

November 1 is the Catholics' All Saints Day, which is not as good as All Souls Day one day later (in Mexico both days are Dia de Muertos, which is pretty cool). As with mid-Summer, the evening before is the big celebration, at least here.

August 1 is actually the least of them as far as celebrations are concerned, especially here in America where our Summer celebration is July 4. (There is the excellent Shakespeare play, A Midsummer's Night Dream).

May 1 was big with the Communists and I have to admit I miss the big tank parades in Red Square, Moscow. Below is a recent smaller, Russian version of what the Soviets did. I won't get into the Pagan phallic Spring celebration involving a pole and ribbons. 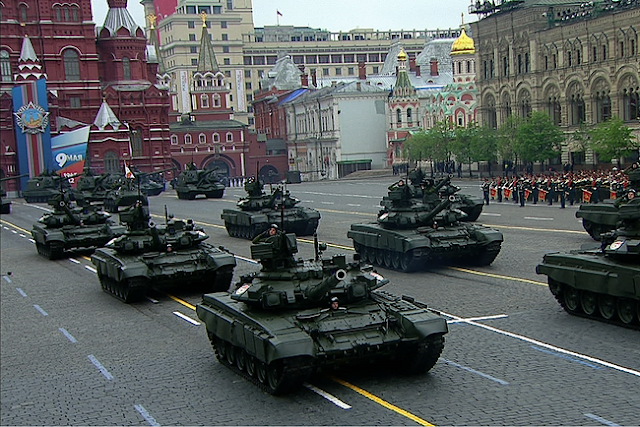 So happy cross quarter day. Now get back to work.