So the bird chopping, bat killing, giant noisy eyesores become merely useless art projects regarding how some misguided (or ignorant) people think they are helping the environment when actually they're hurting it.

Nothing a .50 BMG API round couldn't fix. 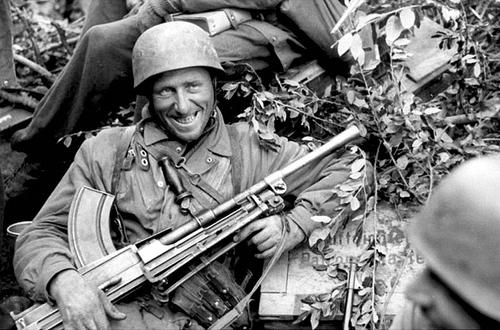 German paratrooper (Fallschirmjäger) happy with his captured British Bren Gun. The Bren gun was a rip off of a Czech design, by Vaclav Holek, named the Zb vz 26. The b in the name stood for Brno which the Brits mispronounced as Bren (Czech is hard, man!). The top loading magazine caused the gunner to have to sight down the side a little. Pretty good gun which lasted a long time with the British Army (1938 through 2006). At first, it shot the fully potent .303; later the wimpier .308 (NATO 7.62x51 mm).

The Long Dark Teatime of the Soul

I have generally been optimistic about America's future. As an example of my faith in my fellow citizens' IQ and seriousness of purpose, I have never blamed a jury for the loss of any case I tried. I thought the juries were smart and dedicated to the purpose of doing justice. But lately....


First there was Idiocracy, the movie. Now we seem to be getting ready for Idiocracy II, the reality. And I despair.