Dora says, "Have children!"
Mama and Betsy say-"Find yourself a charity."
Help the needy and the crippled or put some time into Ecology."
Well, there's a wide wide world of noble causes
And lovely landscapes to discover
But all I really want right now
Is...find another lover

Joni Mitchell in Song For Sharon from Hejira

Second Thought of the Day

In interviews, job summits, and press conferences, it was shovel-ready this, shovel-ready that. Search the White House website for the term "shovel--ready" and you'll drown in press releases about all the shovels ready to shove shovel-ready projects into the 21st century, where no shovel is left behind.

Only now it turns out that the president was shoveling something all right when he was talking about shovel-ready jobs - a whole pile of steaming something.

In the current issue of The New York Times Magazine, Obama admits that there's "no such thing as shovel-ready" when it comes to public works.

It's not that Obama was lying when he said all that stuff. It's just that he didn't know what he was talking about. All it took was nearly a trillion dollars in stimulus money and 20-plus months of on-the-job training for him to discover that he was talking nonsense.

Meanwhile, Washington is now spending 23 percent more than it did two years ago. As the Washington Post recently editorialized, Congress's "emergency" bailout to avoid "a teachers crisis" was a fraud to simply transfer billions to the teachers' unions in advance of the midterms.

And then, of course, there's the stimulus that paid for all of those "shovel-ready jobs" that Obama now admits never existed. Los Angeles County deployed $111 million in stimulus money to "save" 55 jobs at the cost of $2 million apiece. The White House has spent $192 million on road signs that brag about how the construction delays ahead were paid for by the stimulus. Meanwhile, unemployment is a full three percentage points higher during Obama's "recovery" than it was during the "worst recession since the Great Depression."

First Thought of the Day

Nothing did more to energize conservatism in the 1970s than judges and legislators collaborating in the forced busing of (other people's) children to achieve racial balance in (other people's) schools. This policy expressed liberalism's principled refusal to be deterred by the public's misunderstanding of what is good for it. Obamacare is today's expression of liberalism's kamikaze devotion to unwanted help for Americans, the ingrates.

There are kids who are obese in this state who are going to school hungry.

I think at this stage, it’s very hard to rally Democrats, because I think a lot of them recognize, I think a lot of them are actually ashamed of what happened in 2008. it’s fascinating to me, I was driving earlier today through a little liberal enclave of New Hampshire. And I do not recall in any electoral cycle seeing so few Democratic Party signs. I mean normally, the Democrats in that particular town outnumber the Republican candidate signs very considerably. The Democrat signs are conspicuous by their absence. And I think people understand that they were taken for a ride in 2008. I saw this ridiculous video on the internet earlier today of some nude students protesting don’t take away our coverage, meaning you know, Obamacare covers them until the age of 26, supposedly. And I was rather touched by it, because these must be the last twelve people, twelve young people still singing the starry-eyed, hopeychangey balderdash from 2008. This is a tremendous fall, and comprehensive fall, in almost record time. I mean, this is beyond Carter. Carter was not a messiah. And what has happened to Obama is remarkable. 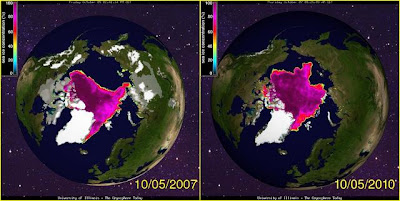 We're just a couple of weeks into the refreezing. We're still way down, but we're over 6 million square kilometers away from ice free. And it looks a lot more like the 30 year 'normal' we know than the 2007 minimum there on the left.

The current extent is about equal to India and Argentina combined, the 7th and 8th largest countries on the map.

All of the recent civilian trials of foreign national terrorists have been utter disasters, but almost all of them have been "saved" by the desire of the terrorists to plead guilty and become incarcerated martyrs. When the Obama justice department announced during the first year that they would try in civilian courts in Manhattan several foreign national terrorists, who had attacked us overseas and had never even been in America, the outcry from right thinking individuals was immediate. Don't do it! Use the military tribunals. There's no good reason to give the illegal combatants more rights than captured proper military. You'll be sorry.

Of course, the Obama administration always knows so much better what's right than the troglodyte Republicans, so the warnings were ignored.

And what's the outcome?

Is there anything the Obama administration can do competently?

The uncomfortable truth is that many -- not most, but many -- Democratic politicians and Democratic voters saw political benefit in an American defeat in Iraq. Many, including Senate Democratic leader Tom Daschle, then boss of Obama's new chief of staff Pete Rouse, thronged to the Washington premiere of Michael Moore's "Fahrenheit 9/11." They tried to give every appearance of agreeing with the "Bush-lied-people-died" crowd and with those who charged that high-ranking officials colluded in systematic torture.

It was a lot of fun while it lasted, up to election night 2008 and Inauguration Day 2009. But then Obama had to govern. Knowing little of military affairs, he retained Defense Secretary Robert Gates, who has loyally served presidents of both parties. Understanding even if not admitting the great headway Americans had made in Iraq, Obama declined to throw it all away.

Appreciating that Afghanistan was critical to protecting Americans, he made a commitment to increase troop levels there in May 2009, reconsidered it from August to November, then restated it Dec. 1, with a commitment to begin withdrawals in July 2011.

In so doing, Obama implicitly confessed that the view of the world held with quasi-religious fervor by the Democratic left was delusional all along. Bush didn't lie, we didn't go into Afghanistan and Iraq without allies and against their wishes, we didn't carry out policies of torture, etc. The effort to cast Iraq as another Vietnam and America under Bush as an oppressive rogue power were perhaps emotionally satisfying but unconnected to reality.

Without saying so, Obama has found himself having to teach this lesson to the Adam Serwers of the world. They don't like hearing it. They're keeping their ears plugged up and their eyes defiantly shut. Their MyObama Web pages are inactive and their checkbooks are closed. They've tuned out of the campaign and many of them won't even vote. The president they helped elect -- and the world -- have turned out not to be what they thought.

I have to admit that I found the advertisement regarding carbon footprints with the polar bears dropping to their deaths from the sky somewhat disturbing. So too the Warmie true believer ad with hundreds of planes attacking the WTC. They were nothing compared to this disgusting bit of wish fulfillment from the 10/10 project (see just below). It is a video not for the faint of heart, which I guess is a statement of not insignificant praise.

And here is Franny Armstrong, one of the founders of the Warmie "solution" -- cutting 10% of your carbon dioxide production each year for the next 10 years -- apparently joking about her true desire regarding those who disagree with her:

What to do with those people, who are together threatening everybody's existence on this planet? Clearly we don't really think they should be blown up, that's just a joke for the mini-movie, but maybe a little amputating would be a good place to start?

Ha ha ha, so freakin' funny. Since a plurality of Warmies believe that the so called ideal human population for Earth is 100 Million, that leaves about 6.9 Billion "threatening" non-believers out there to cut up or blown up.

Since they are losing the argument, the Warmie rhetoric grows ever more desperate, ever more violent and threatening and ever more off-putting -- and I won't even mention ever more revealing of what they really want. (Apophasis is my rhetorical choice there).

h/t Small Dead Animals and Watts Up With That

Without a marriage norm, boys have little incentive to develop the habits of self-discipline and deferred gratification that make a male an attractive and capable lifetime husband and father—and that also inoculate him against a life on the streets. When boys grow up in a world where it is perfectly normal for males to conceive children and then disappear from those children’s lives, they fail to learn the most basic lesson of personal responsibility.