Our intrepid Arctic rowers (2013 version) have pulled an all-nighter and are rapidly approaching Nunavut from their starting place in the Mackenzie river delta in the Northwest Territories in Canada. Well rowed, lads! By my calculations (eyeballing their route so far at their own website) they have rowed over 800 Km in just under 37 days. Brilliant! About 800 Km ahead is trouble. The Northwest Passage there in the Victoria Strait is completely blocked by sea ice. They could go the long way around King William Island, but even then the  sea ice prevents their intended passage through the narrow, often ice-bound strait about halfway up the somewhat mis-named Boothia Peninsula. They are making good progress now but...

Perhaps the ice will melt by the time they get to the Boothia Peninsula, actually a peninsula and an island (Somerset Island), but here is a graph of the temperatures in the Arctic this Summer. The average Arctic temperatures this Summer have always been at or below (mostly below) average, but recently they have dipped below freezing. That's a little early. Three weeks early. I admit I don't know what effect freezing air temperatures will have on further sea ice melting. Perhaps there will be no effect. 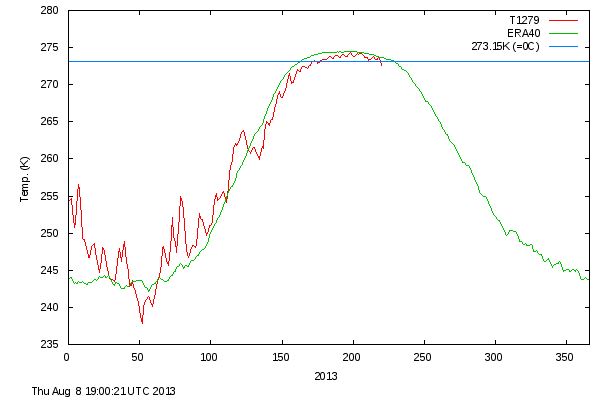 Because I don't believe in scary anthropogenic global warming, I do wish these guys' adventure (Pulling together against Climate Change) ends in humiliating failure, but I have for them no ill-will and I hope they don't suffer anything else other than humiliation.

Given the time constraints (the Arctic sea ice almost always begins to expand rapidly after September 20th) and the long way to go (over 2000 Km), I'd have to say the odds are against them, but they have made a strong showing when the weather was with them these past few days and perhaps they will surprise me.

I promised in an earlier post I'd make a prediction of their stopping point by August 1, 2013. My, how the irreplaceable time flies! OK: They don't get to Baffin Island. I'm not out on a limb there given the distance, difficulty which may not dissipate, and time left until they have to leave.

The Arctic is freakin' cold even in the Summer. Tell me I'm not right, mates.