A Nation of Morons

It is difficult to imagine a more uninformed article than this one by Madeline Ostrander in the Nation. Let's take a look.

The title is: Frigid and Sweltering: The New Climate Normal, so I don't think I'm going out on much of a limb to think she believes that the amount of CO2 from fossil fuel burned by humans controls every aspect of daily weather. It is an irrefutable premise to say that every aspect of the weather proves your theory about the weather. A real scientific theory is able to be refuted by evidence. Moving on.

Climate change often seems more palpable (and gets more media coverage) at this time of year, after heat waves have hit parts of the country. But polls suggest many members of the public are confused about the connection between climate change and cold weather.


Just because "climate change" has replaced "global warming" as the Y2Kyoto crisis, since it has ceased to warm lately, doesn't mean the new name stands for anything other than global warming, so when it's warm, some people think "maybe this global warming is true after all; it certainly is hot now." But notice the elitism in the second sentence. We members of the public are too stupid to see how global warming associates with record cold weather. If only we had the majestic breadth of knowledge Ms. Ostrander received getting her masters in environmental science at UWisWhatever, we would know that extreme cold is also the result of too much CO2 in the atmosphere.

As I noted in a post last week, belief in climate change drops among Americans during cold weather and dipped slightly after this past winter. Moreover, climate deniers and right-wing pundits tend to hype winter weather, as if climate models never anticipated another flake of snow.


I'm unsure what a climate denier is. I certainly deny that anthropogenic CO2 is having an alarming effect on the climate but I don't deny there is a climate. "Climate denier" is merely nonsense name-calling. But when a lot of scientist said that global warming would indeed lead to less snow, why isn't it relevant to ask why have there been years of record snows lately? It is merely a strawman to say the right-wing pundits had accused the climate models of promising not "another flake of snow." Reductio ad absurdum is not logical argument. The right-wing AGW crisis deniers are saying the climate models are hopelessly inadequate to predict anything reliably and have been constantly overstating warming in the Troposphere since they first started being run.

She then touts a NOAA article which has been well criticized and then lists a parade of horribles, all of which are unfortunately false.

Among the highlights, the United States had its warmest year since the country began keeping records in 1895. Colorado, Montana, Nebraska and Wyoming had their driest years on record. Last summer, delivered the biggest wildfires in thirteen years, including the largest fire in New Mexico’s history (more than 460 square miles, or about the size of the city of Los Angeles).


1934 was almost certainly the warmest year in the last 120 years in United States. 2012 was about the coldest worldwide of the last 10 years. 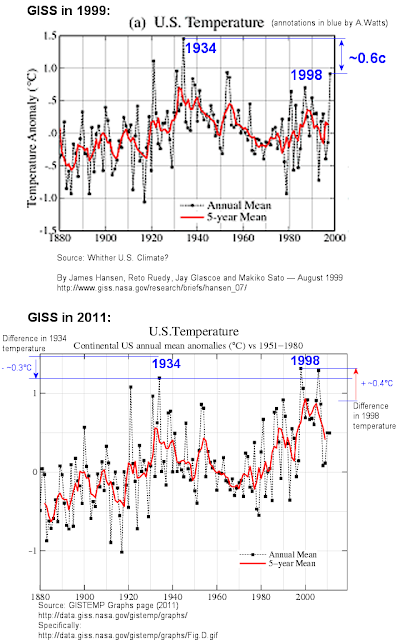 The recent 2012 spike on the GISS graph is suspect because of the recent, never justified "adjustment" to that record two years ago.


The dustbowl month of July, 1934, unsurprisingly, was the driest month ever recorded for nearly all of the western and great lake states.

2012 was not even close to a record fire year in the US and this year, so far, is the most quiet for the number forest and wild fires in the past near decade. 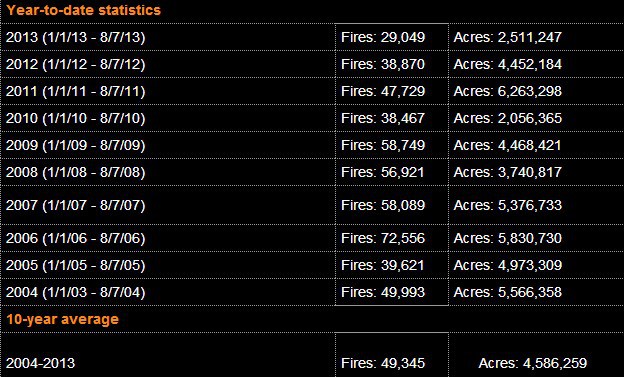 Rather than 'cherry pick' a fire here or there, wouldn't it be better to look at the whole nation for something you claim is a result of a change in climate, that is, a long term weather trend involving not only our whole nation but the whole world as well? Just asking.


But even though the planet as a whole is getting warmer, the report makes it clear that there are new trends of weird and extreme weather in all seasons. For example, Hurricane Sandy sent record early-season snow to central Appalachia.


The planet is not getting warmer as a whole. Weird and extreme weather is not increasing and even her ilk of global warming alarmists admit that Sandy had nothing to do with additional CO2 in the atmosphere. She then mentions some of the very cold spells in two European nations last winter (more cherry picking) and tries (without much success) to tie that cold to the warmth her fellow true believers attribute to additional CO2 in the atmosphere. That's a difficult sell to rational people. Then the big finish.

The tome-sized NOAA report is a reminder that the global climate is extremely complex, and climate trends can’t be easily simplified. But the planet is getting warmer, even while ski seasons in the western United States shorten and Europe gets more deep freezes.

Yes, this weather is crazy. And yes, it is our fault.


Weather is indeed extremely complex and therefore climate trends cannot be simplified and still be scientifically sound, but simplifying them to 'man caused CO2 controls everything in weather and climate' is a perfect example of the sort of silly simplification she professes not to be falling prey to. But this "extreme weather" shelter the CO2 chicken littles have had to retreat to because it's no longer warming (despite the continued rise of CO2 in the atmosphere) is a trap, because the weather is not getting more extreme. There is not a single graph of 5 decades or more of the incidence and severity of anything we would consider extreme weather (major storms, severe tornadoes, floods, droughts, etc.) which shows any increase whatsoever. All those graphs show is the regular sine wave of variability all weather has over time; and many of them show a downward trend in extreme weather components as CO2 in the atmosphere rose from 315 parts per MILLION in 1958 to almost 400 ppmv recently.

I think the extreme weather meme is very unfortunate for the global warming true believers because, although it might convince a few who can't remember any weather history, most of us can look it up and see the latest climate crisis of supposed increasing extreme weather just isn't so.