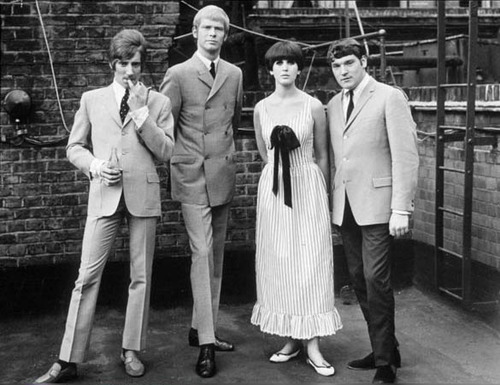 Sometimes called the first supergroup, The Steam Packet, or at least four of them. Rod Stewart (vocals) Long John Baldry (vocals), Julie Driscol (vocals), and Brian Auger (Hammond B-3). Not pictured are Vic Briggs (guitar), Richard Brown aka Ricky Fenson (bass) and Mickey Waller (drums). Of the group, only two, openly gay Baldry and Waller, are dead. The rest are generally still performing, in their 60s and 70s. Briggs became a Sikh (I didn't know they let non-Indians in). Waller became a lawyer and used that profession to collect long overdue royalties.

The Steam Packet never recorded in a studio and only lasted 65-66, until Stewart left them. It's generally not worth the effort to find live recordings of the group as the whole was less than almost any of the parts on their own.