Here is U. S. Senator from Colorado Mark Udall, pledging to fight for useless*, bird chopping, bat killing, ugly wind turbines to be further subsidized by federal spending, already borrowing 40 cents on every dollar spent. What a waste of time, effort, resources and wild animals.

Udall plugs the continued taxpayer support as saving jobs. How much does each job actually cost the taxpayers and their kids and grandkids in future debt? This position alone disqualifies Mr. Udall from being re-elected by a serious electorate. 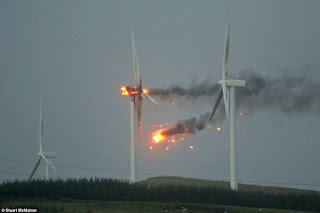 * The power generated by the few hundred or so working windmills we have in this state does not save a single watt of coal or gas produced electricity, nor a single ounce of CO2 (if that mattered) because the coal and gas fired plants, which supply over 90 % of the electricity in this state are generally not nimble enough to ramp up power if the wind is not blowing right then (or if it's blowing too hard) and so just set baseline power as if there were no intermittent sources, like wind or solar, around. Gas fired plants could be nimble enough in theory.

Right now wind and solar combined 'produce' 5.83% of our state's electricity and are legisatively mandated to produce (along with CO2 producing biomass) 30% of our electricity, over 5 times what we're supposedly doing now, in less that 7 and 1/2 years. Good luck with that.

So far the Congress has not voted to renew the subsidy and if they don't, the lost taxpayer support will certainly end this madness for useless intermittent 'green' power production as it did recently in Spain.