Shot Rings Out in the Memphis Sky 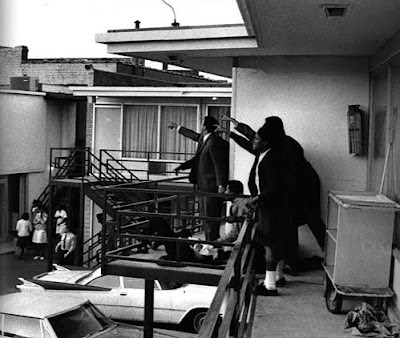 This iconic photo of Dr. King's entourage pointing in the direction of the shot which killed the great Republican civil rights leader does not show the whole picture.

Despite the conspiracy theories (more on that below), there is little real doubt that James Earl Ray shot and killed Martin Luther King on 4/4/68 with a single, soft point Remington Peters 30.06 round from his recently purchased Remington Game Master slide action rifle, Model 760. He shot him from a rooming house across Mulberry Street (located on Main Street), in fact, from a bathroom window right about where all the people in the photo are pointing. Here is the bigger current photo of the location.

The brown building on the left of the photo is the rooming house. The bathroom window is visible just under the banner on the light pole. 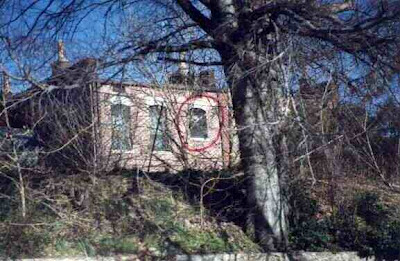 The big trees that used to be there (see photo) were removed and the front of the Lorraine motel has changed, but the distance and the line of sight are the same. It is less than 100 yards (200 feet according to Google Maps)--an easy shot for a scoped rifle, which Ray's was (a Redfield variable scope on Weaver mounts).

Now, there are some details of the story which have always caused me to say this murder was a conspiracy. How the heck did this unemployed prison escapee get a Canadian passport and over to England? I'm over that now that I've read more, but I am still troubled by one fact. Ray purchased the 30.06 rifle in Birmingham, but it was an exchange for the .243 calibre rifle he had bought the day before.

Why did he switch out rifles? Who told him to get a bigger calibre piece? This is something we will never know, I fear.

If it was a conspiracy, the most likely unindicted culprits were racist southern Democrats, which likelihood does not fit the current politically correct thinking regarding the South and so shadowy, right wing government entities are concocted out of clear air, just as with President Kennedy.

Reading the brief history of Ray at Wikipedia, it sounds like he had some experience with traveling under an alias, so I don't know if that's much to go on.

In my experience, a .243 is a perfectly good deer gun, but a 30.06 is designed to kill a human. Why did he switch then? I agree about making too much of his ability to escape and travel as someone else. But there are little hints here and there that Ray was either reporting in to or getting help from someone else. Pretty thin gruel for a conspiracy theory I agree. Oh and he didn't know the range of the shot when he purchased the rifles. Ray had been in the army which then used 30.06 a lot. Why not go first with it? Perhaps this is mountain/molehill.