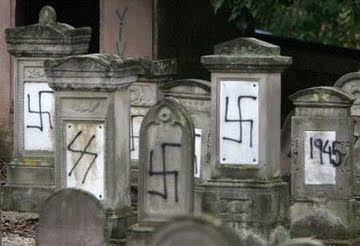 The Toulouse assumptions [that Jewish school chldren were murdered by a skinhead rather than by a Muslim] were particularly deluded. If the flow of information is really controlled by Jews, as the Reverend Jeremiah Wright assured his students at the Chicago Theological Seminary a year or two back, you'd think they'd be a little better at making their media minions aware of one of the bleakest stories of the early 21st century: the extinguishing of what's left of Jewish life in Europe. It would seem to me that the first reaction, upon hearing of a Jewish school shooting, would be to put it in the context of the other targeted schools, synagogues, community centers, and cemeteries. And yet liberal American Jews seem barely aware of this grim roll call. Even if you put to one side the public school in Denmark that says it can no longer take Jewish children because of the security situation, and the five children of the chief rabbi of Amsterdam who've decided to emigrate, and the Swedish Jews fleeing the most famously tolerant nation in Europe because of its pervasive anti-Semitism; even if you put all that to the side and consider only the situation in France... No, wait, forget the Villiers-le-Bel schoolgirl brutally beaten by a gang jeering, "Jews must die"; and the Paris disc-jockey who had his throat slit, his eyes gouged out, and his face ripped off by a neighbor who crowed, "I have killed my Jew"; and the young Frenchman tortured to death over three weeks, while his family listened via phone to his howls of agony as his captors chanted from the Koran... No, put all that to one side, too, and consider only the city of Toulouse. In recent years, in this one city, a synagogue has been firebombed, another set alight when two burning cars were driven into it, a third burgled and "Dirty Jews" scrawled on the ark housing the Torah, a kosher butcher's strafed with gunfire, a Jewish sports association attacked with Molotov cocktails...

I have had difficulty finding reliable figures but it seems that nearly 15,000 French Jews have emigrated to America and Israel in the past decade and a half. Who can blame them? With our past two presidents prostrate and feckless about Iran's plans for a sub-atomic Shoah, I'd come here rather than to Israel, but maybe that's just me.