I went to hear climate scientist Susan Solomon last night give a power point presentation on global warming. It was sponsored by the local Ivy League schools alumni chapters (including MIT and Stanford) and, as usual, the average age of the audience was about 70. I found the lecture to be well presented. The lecturer was not wild eyed apocalyptic and indeed did her best to deflate the worst case scenarios of a few questioners. She did not answer my question (How much of the CO2 in the atmosphere is natural and how much man made?) but I'm not angry because she pointed me to a different understanding, for which I'm grateful. Dr. Solomon was important in helping to create a climate of action to get rid of chlorofluorocarbons in our hair sprays, etc. which seems to have put the "Ozone Hole" on the road to recovery. Yeah! But she is a Warmie and believes the doubling of current CO2 concentration, by 2050, will lead to 3 degree C. warming, which in turn will effect rainfall patterns which will do damage to some and be a blessing to others.

She uses some of the perhaps unconscious Warmie tricks of presentation. Behold

See the graph starts at 160 ppm, not at 0 ppm so it looks a lot scarier than the graph that gives the whole story. 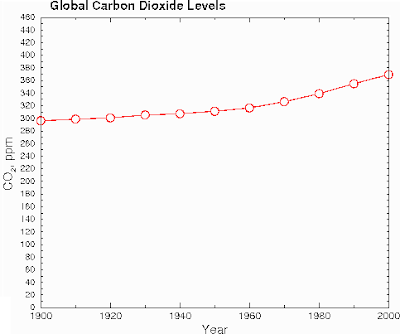 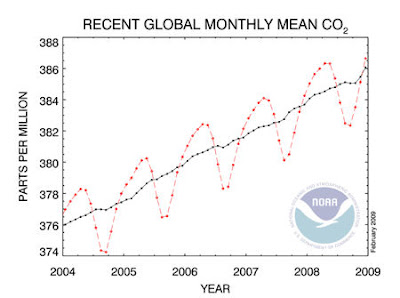 The graph which shows annual waxing and waning of CO2 on an ever growing up slope is what she used to redirect my question. Sure the yearly dump of CO2 into the atmosphere as the deciduous leaves in the Northern Hemisphere decay is natural but it is in balance with the Spring growth spurt which takes
up the CO2 the Fall decay put into the atmosphere. What's important is the gradual rise, which no sane person thinks is from anything but fossil fuel burning (at least mostly). See the straight up line in the Vostok CO2--the top graph? That's our contribution and that's what's important -- an unprecedented nearly instantaneous rise in CO2. I've often said the theory is logical. Here, however, is what she did not show. 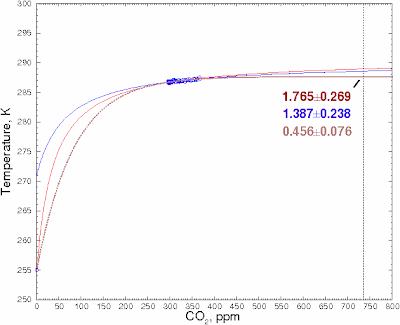 The effect of CO2 in the atmosphere is asymptotic. The effect gets flatter and flatter (We all know this diminishing return from our lives. For example, when we put the first blanket on the bed on a cold night, the effect is immediate and substantial, but the second blanket, doubling the blanket concentration, has a much smaller effect and putting on two more blankets, doubling again, has almost no effect at all. We are not measurably warmer under 8 blankets than under 4. The warming from blankets is pretty much saturated by the second doubling, certainly by the third). Here is an accurate graph of the last 2000 years of temperature, in the temperate zones, (as opposed to the Mann hockey stick nonsense for which Dr. Solomon must take some blame, as she at least allowed its inclusion in the IPCC report she helped author). Both the Roman Warm period and the Medieval Warm period (with CO2 at 270-280) were warmer than it is now. The climb of temperatures from 700 to 1000 is about the same as the climb from 1750 to 2000, but the earlier climb was when CO2 was the same as it had been for 600,000 years. What we've seen since 1750 is merely a return from very cold to more "normal" conditions and CO2 had little or nothing to do with most of that recovery.

The short version is that almost all scientists agree with the diminishing return and that slightly higher temperatures will produce more water vapor. We Deniers believe that at near saturation, CO2 doubling will have very little effect other than to put more cooling clouds in the sky. Dr. Solomon did nothing to cause me to doubt my doubting.

Comments:
It also will cause abnormal plant growth and this means more O2... Right?