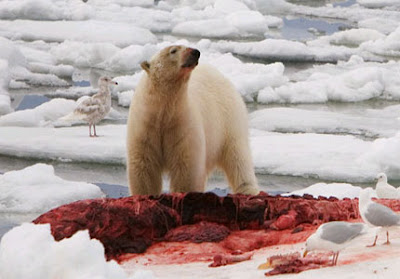 Here is an article about predictions of the birth rates of polar bears in the Western Hudson Bay area (one of the few areas where scientists, but not the native Inuit, say populations are declining). Of course the predictions are dire and the whole fault is laid on anthropogenic global warming. Here is what the locals in Churchill say, but what the heck do they know? They merely live in the Western Hudson Bay area, they don't have degrees in biology. They're stupid. Warmie scientists in Universities elsewhere know better. I see I've digressed, so back to the subject at hand.

Here is a science popularizer with the NYT writing about the above article, poorly.

And here is a Denier jumping on the NYT guy for not knowing that polar bears hibernate during the winter.

But hold on there, kitty cat.

Male polar bears, and females who are not pregnant, don't hibernate, but stalk the frozen floes in search of tasty and nutritious ringed seals through the winter. The pregnant females dig a snow den in early October and don't come out until February or March. Wait, but the point of the original article was all about the effects of less ice on the western part of Hudson Bay on the litter sizes of pregnant polar bears, and, wait, pregnant females do, for all intents and purposes, hibernate, so who cares what the ice and the hunting is like during the winter when they are in a den and not on the ice hunting? This is confusing.

Nothing kills a polar bear but men and other polar bears, but, like all predators, they are completely dependent on the prey species they hunt and eat. If there are too many polar bears for the available prey species to feed them all, (or there is a natural disruption in the weather so that the prey is inaccessible to a stable population), some of the bears, particularly the excess bears, starve to death. (As we saw on one episode of Planet Earth). Did the polar bears in the Western Hudson Bay area exceed the carrying limit for polar bears? How many bears were there before humans began hunting them or their prey? Do the bear populations fluctuate there naturally? Is the "early" break-up of the Hudson Bay ice in late Summer a naturally occurring pattern which the polar bears have faced and survived for millennia? Is there a natural boom and bust cycle for polar bears and ringed seals, just as there is a predator/prey cycle for lynx and snowshoe hares? No studies on those questions exist. They wouldn't fit the approved narrative.

Have you ever cited or posited yourself an explanation of why Greenland's glaciers are melting at an unprecedented rate?

Or why coastal ice in Antarctica ids breaking up?

I am not going to argue about fertility rates in polar bears nor climategate nor green energy.

I just think that if you do not beleive the planet is getting warmking--no matter what the reason--you are in denial.

The "unprecedented" rate of melting in part of Greenland has gone back to precedented and I wrote on that. The break up of some of the smaller ice shelves on the Antarctic Peninsula seems to be more tidal stress than melting but it is warmer on the AP, probably from shifts in warm currents. The planet warms and cools, cools and warms. some places have record heat, other places have record cool. We have recovered some from the Little Ice Age but nothing "unprecedented" nor, actually, that interesting. What is interesting is the recent corruption of science and the political divide on the gullible.
You don't like polar bears?

The photos are wonderful. Check out the skiers in northern Japan.