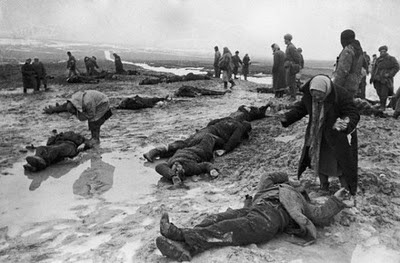 Except for some fringe nuts here and there, no one denies that the Germans, having decided in January 1942 that the final solution to the Jewish question was to be murder on an industrial scale, went on to murder 6 million European Jews before the end of the war. Part of that awful toll was the so called Holocaust by bullets, carried out by Nazi Einsatzgruppen mainly in newly conquered parts of the Soviet Union. One of the earlier massacres took place in a ravine north west of Kiev, the capital of the Ukraine, on the 29th and 30th of September, 1941, four months before the Wannsee Conference. The name of the ravine, near one of the Jewish cemeteries in Kiev, is Babi Yar. 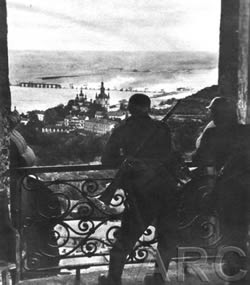 The German forces secured Kiev on September 19, 1941. Over the next week, Soviet NKDV sappers conducted a bombing campaign which was immediately blamed on the Jews. On September 26, 1941, a notice was posted informing all Jews (the notice used the word "Kikes") in and around Kiev to report at 8:00 am on September 29 at Dorogozhitskaya Street, next to the Jewish cemetery there. Failure to assemble was punishable by death. 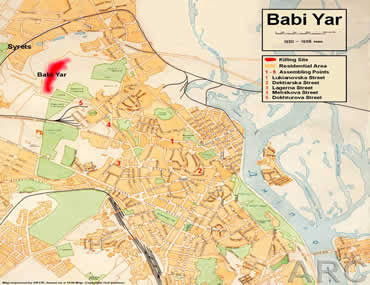 Since there was no history of large scale massacres by the Germans at that time, the Jews obeyed and lined up at the appointed time and place. Historians tell us that they believed they were being relocated, a practice which did then have a history following the German conquest of Poland. After a few exemplary murders to set the tone and get the group in motion, they were marched to the ravine where they were told to undress and then rushed in groups of ten or so into the ravine, There they were told to lie down and were then shot by rifles and machine pistols. Over 33,000 men women and children were killed over the rest of the day and the next. It is considered to be the largest single massacre of Jews by bullets during the war. 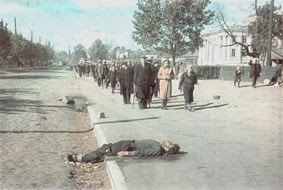 It was not the end of the slaughter. Over the next year and a half, nearly 270,000 more, many of them Soviet prisoners of war, but mostly Gypsies, were murdered there--shot and buried by collapsing the walls of the ravine onto the bodies. 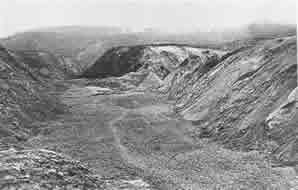 Starting in 1943, when the Red Army was on the march to liberate the Ukraine, an attempted cover up began and most of the bodies of those murdered in the ravine were dug up and burned. 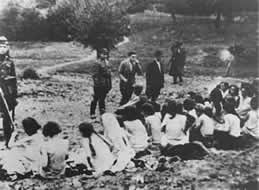 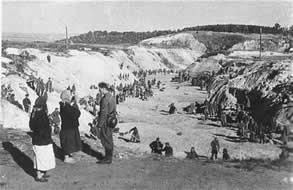 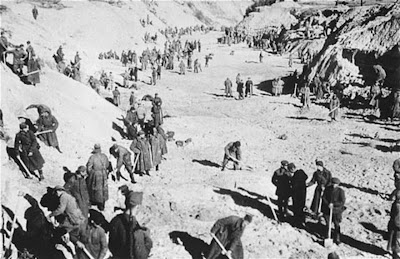 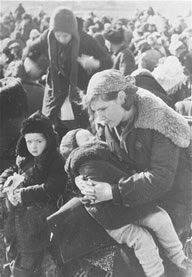 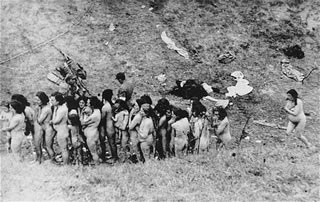 Intermixed in the photos of the cover up activities are other photos of the original massacre. Most of the overseers seem to be other than German soldiers, and it is my belief that some of the killing and much of the crowd control was done by Ukrainian police. The last three photos are not the saddest but the most graphic as the naked women, some with infants in their arms face the penultimate line up and in the last photo, are actually shot. 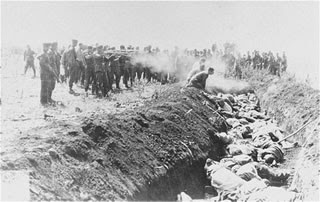 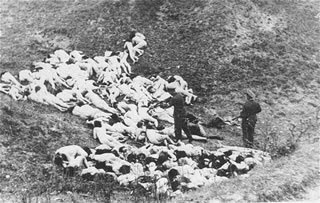 I am reminded of the never-dying hatred of the Jews displayed in Babi Yar when I read recently of the return of open anti-Semitism in Western Europe and the ravings of Ahmadinijad in Iran, who denies that there was a first Holocaust as his government feverishly prepares to cause a second.

UPDATE: I am informed by this article about the 75th anniversary of the slaughter, that there were slaughters of Jews with higher body counts than here. Sorry. It's difficult to keep up with the count.