Thoughts of the Day about Sarah Palin's Breasts 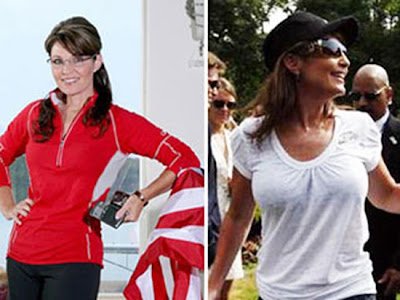 First, does the left enhance -- and I use the word advisedly -- its appeal among the electorate by suggesting that we ought to ridicule women for getting breast implants? The boobery need no further reminder that the left disdains their sense of aesthetic, but if liberals want to beat them over the head with it, fine. This may, in the end, be Palin's greatest contribution to conservative political fortunes: She suckers the chattering left in to reminding everybody that they are, well, snots.

Second, we note that privacy in medical matters is the legal foundation of the Constitutional right to abortion, per Roe v. Wade. This right to privacy is apparently so sacred that (so says the left) it is reasonable to sacrifice fetuses to defend it. One would think that the left, therefore, would be reluctant to intrude on even Sarah Palin's medical privacy. Of course, that would require some measure of intellectual honesty, which is apparently beyond the capacity of many liberals when Sarah Palin is involved.
TigerHawk

Comments:
Rog, W/ all due respoect, you should leave these turkeys who spout off about feminism alone as these comments demonstrate that their thought processes are the southern product of a north walking horse.

Sarah Palin does not heave breast implants. Liberals may be snotty about Sarah Palin but the truth is a complete defense. My Women's Studies major in residence advises that Sarah Plain is no feminist. She does not care about advancing women in society, she merely cares about advancing herself as a woman in society. My resident expert describes her political calculation as "cold."

Sarah Palin bailed on her constituents to become a media darling. Je me souviens. Vous aussi.

I found her reasons (in Going Rogue) for quitting the job as Alaskan Governor both reasonable and honorable. She supports other Republican women who are running for office, they appreciate her endorsement and they win (so far), and your women studies major says she does not care about advancing women in society. Sounds like a break with reality to me. D'Accord?

If the left thinks breast implants are bad, they've just condemned 99.9 percent of women in the entertainment field--all women who embrace the left.

IOW, it's just another example of the left's hypocrisy.