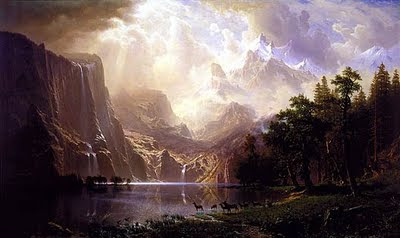 In high school we took a practical art/art history class senior year. It was a hoot. My best friend Frank Kelly and I couldn't draw a straight line, but we loved the art history part and did our best to memorize the famous paintings, etc. and the years they were produced. There was, one day, a remarkable series of slides shown by the teacher.

It was a big Bierstadt painting, but the slide series started with a detail of the painting, a pool of water with a turtle in it. The next slide pulled back a little and showed more of the painting, and on and on for about 20 slides until the whole painting, of the Sierra Nevada mountain range, was revealed. Frank, who is now a big wig in the National Gallery--specializing in American 19th C . landscapes--was seriously impressed and indeed his ultimate career path started that day, I believe.

I think the remarkable thing of the slide show was the constantly changing, expanding, frame of reference of the work.

So here is a similar ever expanding series of graphs from a glacier in Greenland which covers the past 50,000 and shows the temperature record therefrom.

The first graph, above, back just to 1400, about a 150 years after the end of the Medieval Warm Period, shows a hockey stick style graph, with a steep rise beginning about 1825. Ooh, scary.

The little 1825-on "blade" of the first graph is revealed to be a very small version of many sudden rapid rises in temperature again and again and again.

Back up again to 9,000 BC and the start of the interglacial is a huge steep climb in temperature which reduces the 1825-on "blade" of the first graph to utter insignificance. Back to 50,000 during the depths of the latest ice age, and the interglacial is revealed to be the oasis one would expect. The final graph is the Vostok Antarctic ice core which takes the temperature record back to 400,000 BC and shows a series of ice ages with brief, warm interglacials in between. This is the same graph Al Gore used in An Inconvenient Truth to show a congruence of CO2 and warmth (of course Al neglected to show that the warmth preceded the rise in CO2 by an average of 800 years). To a disinterested viewer, the final graph shows that the little bit of warming since 1825 is absolutely within the norm of ancient warmings, indeed it is dwarfed by most of them, and there is nothing, NOTHING, special or even slightly alarming about the recent climate change. Since the rapid big warmings over the past 400,000 years were clearly before any industrialization or the burning of fossil fuels, there appears to be nothing in history which would cause us to believe that recent warming is anything new, and certainly nothing alarming.

With the correct frames of reference, our modest recent warming is reduced to mere background noise in the constant flux of mean temperature. It is reduced to nothing at all.

Comments:
Yeah, and if you go back like hundreds of millions of years, there wasn't even much oxygen and it was all volcanos and swirling toxic gasses, so nothing to worry about right?

Heh, you might want to look up the term, "straw man argument". I particularly recommend The Nizkor Project. From your comment, I'm sure you'll find the information instructive.

This from this week's TMQ by Gregg Easterbrook, another very smart guy from CC:

• There is indeed a strong scientific consensus regarding climate change. The deniers simply aren't honest about this.

• The consensus is that in the last century, air has warmed by about one degree Fahrenheit while the oceans have warmed a little and become slightly acidic; rainfall patterns have changed in some places, and most though not all ice melting has accelerated.

• That consensus is significant, but hardly means there is a crisis. Glaciers and sea ice, for example, have been in a melting cycle for thousands of years, while air warming has so far been good for farm yields. The doomsayers simply aren't honest about how mild the science consensus is.

• Predictions of global devastation -- climate change is a "profound emergency" that will "ravage our planet" -- are absurd exaggerations, usually motivated by political or fund-raising agendas.

• Smog and acid rain turned out to be far cheaper to control than predicted; the same may happen with greenhouse gases.

• The United States must regulate greenhouse gases in order to bring American brainpower, in engineering and in business, to bear on the problem.

• A carbon tax, not some super-complex cap-and-trade scheme that mainly creates jobs for bureaucrats and lawyers, would be the best approach.

Mike, just look at the last 4,000 years of contiguous civilization. The recent rise is insignificant even in the short period of time since God told Abraham to sacrifice Isaac. Thanks, Doug, but of course a serious deconstruction in a short comment is tough to do. T, Gregg Easterbrook is smart (who from CC isn't?) but he's wrong on several points. The Deniers are the dishonest ones? Perhaps he should check the East Anglia documents again. He missed the big picture the first time through. A one degree Fahrenheit rise in a century plus is nothing strange, unusual, or portentious. The seas are still fairly strongly basic. Melting has not accelerated over a sustained period and it's some ice, not most. I'm agnostic about rainfall changes. The south Sahara seems to be getting more lately.
There is no problem with CO2, only good things, so we don't need to focus on it. A tax for a non-existent problem is a dumb idea. Thanks, all, for the comments.

T: Most so-called "deniers" do not make a claim about the existence of climate change. (I'm sure you can find somebody, but the response is to point to Gore, et al.) The argument that both make and have regularly seen is that anthropogenesis is of limited importance and that the IPCC's publicized claims (always the top of the range of estimates even from the true believers) about rate and probable effects of warming are unknown and the available evidence is overstated. (IOW, pretty much what Easterbrook said.)

I don't see a decent argument that I should pay to "regulate greenhouse gases" to incent expensive research when my assessment of the probabilities of both short-term (less than a century) significant negative effects from climate and short-term (less than ten years) significant negative effects from governments p*ssing in the swimming pool are what they are right now.

"...a serious deconstruction in a short troll is not even attempted."

FTFY. Where no argument is made, no serious attempt need be made to refute it.

I had to edit the comment b/c it was too long. There were too many characters so the site would not print it.

I thought TMQ came down on the East Anglians, but toward the end so I may have edited unfelicitously. My Bad.