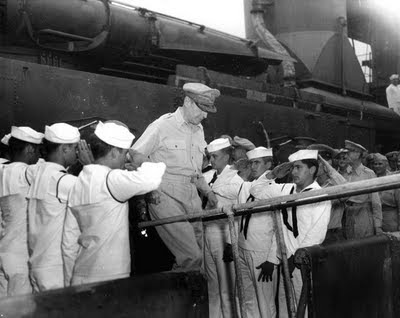 General of the Army (5 star) Douglas MacArthur leaving my dad's ship, the USS Buchanan (DD 484) and re-entering Japan after he had taken Japan's surrender out on the USS Missouri in Tokyo Bay on September 2, 1945. He seems to have suffered from womanly hips, poor guy.
He started slow in WWII but finished strong. He also set Japan on the right post-war path and then utterly defeated the North Koreans south of the 38th parallel in 1950. Things got fubared after that.
We give a salute to all our veterans and our thanks.