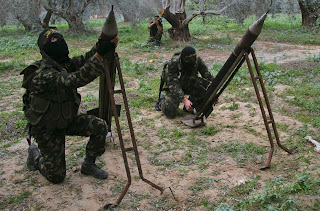 Israel had not suffered an "armed attack" immediately prior to its bombardment of the Gaza Strip. Since firing the first Kassam rocket into Israel in 2002, Hamas and other Palestinian groups have loosed thousands of rockets and mortar shells into Israel, causing about two dozen Israeli deaths and widespread fear. As indiscriminate attacks on civilians, these were war crimes.

So Israel was bombarded by thousands of rockets and mortar shells, and each of these attacks is a war crime, but Israel was not attacked immediately before it launched a counterattack to stop the bombardment. Does the attack need to be immediately before a response to matter? It took us months to get back at Japan for Pearl Harbor. I guess we were in the wrong for bombing Tokyo in April, 1942, when we had not been attacked immediately prior to Doolittle's raid. Complete bull, utter idiocy from Mr. Bisharart. But is the first sentence of this paragraph even true? Here is what the California law professor writes:

But on June 19, 2008, Hamas and Israel commenced a six-month truce. Neither side complied perfectly. Israel refused to substantially ease the suffocating siege of Gaza imposed in June 2007. Hamas permitted sporadic rocket fire -- typically after Israel killed or seized Hamas members in the West Bank, where the truce did not apply.

More on the "suffocating seige" below. OK, so there were rockets fired from Gaza into Israel, sporadically, during the so called truce. Is that keeping the truce? Isn't rocket fire from Gaza into Israel just what the Israelis are trying to shut down now? The truth is that Hamas did not keep the truce and Israel was fully justified to attack rocket caches or other proper targets after the first post June 19, 2008 rocket flew, which appears to be just what the IDF did in November.

Israel then broke the truce on Nov. 4, raiding the Gaza Strip and killing a Palestinian.

So the November 4 attack on a tunnel is Israel breaking the truce, which the professor just admitted Hamas broke, sporadically, throughout the period. I didn't know international law was so complicated. If the Arabs in Gaza break the truce it doesn't count as breaking the truce, but if Israel responds to breaking-the-truce rocket fire from Hamas et al., then it's Israel who has broken the truce. I guess if you keep in mind that no matter what happens, it's Israel's fault, it's less complicated. There's more:

Hamas retaliated with rocket fire; Israel then killed five more Palestinians. In the following days, Hamas continued rocket fire -- yet still no Israelis died. Israel cannot claim self-defense against this escalation, because it was provoked by Israel's own violation.

Wait. You actually have to kill someone with your rocket fire to have it count as an attack? Oh, so if Hamas shoots several thousand missiles and shells, each and every one a war crime, but they all, or mostly all, miss, no harm, no foul--not an attack? Israel, on the other hand, acts in self defense to stop the war crime attacks and is precise in its targeting of proper non-civilian targets, which kill bad guys, and Israel is the bad guy. OK, getting clearer.

An armed attack that is not justified by self-defense is a war of aggression.

OK, so each and every attack out of Gaza by rocket and mortar shell is part of Hamas' war of aggression because it is not justified by self-defense? No, not to Mr. Bisharart--it is the IDF and IAF which are the war criminals, because they are trying to hit proper targets to stop the war crime Hamas attacks. I think we have achieved full Tweedldum logic here, emphasis on the 'dum.'

Israel has also failed to adequately discriminate between military and nonmilitary targets.

I have to ask: Did the Israelis make Hamas put its forces in among of the civilian throngs? Did Israel make Hamas use civilians as shields for the Hamas 'fighters'? No, it was Hamas which chose to put the rocket launchers, et al., right in among the civilians of Gaza, which siting is a war crime in itself. So, because of Hamas' siting war crime, the very fact that Israel attacks the rocket and mortar shell launchers, at all, is proof of Israel's war crime. Ah, ever clearer. Then there's this historical nugget:

Eighty percent of Gaza's 1.5 million residents are Palestinian refugees who were forced from their homes or fled in fear of Jewish terrorist attacks in 1948.

Wait, wasn't it Israel which was attacked in 1948 within hours of its UN creation? And didn't the bulk of Arabs leaving the newly formed Israel do so based on the requests of the governments providing the 5 invading Arab armies? Yes, and the Arabs left their homes in the near certain hope that they would soon return to them after the conquering Arab armies converged on Jerusalem in triumph. Alas, for the Arab refugees, the conquest has been somewhat delayed. There are hundreds of thousands of Arabs living in Israel as full citizens and in safety (except from other Muslims) but Israel does try to keep out the Arabs who want nothing more than to kill Jews. The Israelis strangely find it safer that way. But no, the clear self defense, in which Israel is now fighting in Gaza, is merely another in the long line of "Jewish terrorist attacks" since 1948. Of course, I was blind not to notice.

Although Israel withdrew its settlers and soldiers from Gaza in 2005, it continues to tightly regulate Gaza's coast, airspace and borders. Thus, Israel remains an occupying power with a legal duty to protect Gaza's civilian population.

What? Israel is an occupying power regarding Gaza even though it does not occupy Gaza, and has not since 2005? Wow, you really have to admire the intellect that can call a nation an occupier when it does not occupy--any fool, of course, can do the opposite. So if we protect our own border and try to prevent our neighbors from attacking from the air or sea nearby, we're an occupying power as well? I did not know that. I thought that was merely, well, acting like a normal sovereign nation in, you know, self defense.

But Israel's 18-month siege of the Gaza Strip preceding the current crisis violated this obligation egregiously. It brought economic activity to a near standstill, left children hungry and malnourished, and denied Palestinian students opportunities to study abroad.

The blame for the condition in Gaza is 100% on Hamas, and upon the citizens of Gaza who voted overwhelmingly for Hamas to rule them. Elections, as we are fond of saying here in America, have consequences, and not all of them are good ones.

Comments:
Hamas launched 3000 rockets and mortars into Israel in 2008. That comes out to around 1 every 3 hours. For a year.

How is that "sporadic"?

I wanted to write a short thing with links to let people read the original articles, but there was so much misinformation in the pro Palestinian one that I had to write and write. And you're right, there's nothing sporadic about the constant shelling, although after June 19, it did slow down to merely dozens and dozens of attacks. It turns out the tunnel attacked on Nov. 4 was designed to give Hamas soldiers, if I can call them that, direct access to Israel to kidnap its citizens or soldiers. So it's a war crime to go into Gaza and fill up that tunnel. "No fair, Israel. We've got a truce we're not keeping. You just stay there and be targets to our terrorist campaign." The left's anti-Israel 'logic' here is maddening.

I think you know where my sentiments lie and for those reading this who do not, it isn't w/ the Palestininans. Nevertheless, I am complelled to inquire thw purpose of characterizing pro Palestinian apologists as "left."

Go here, T, http://rfraley301.blogspot.com/2009/01/blog-post_03.html and if you need a link to the polling from Rasmussen, let me know.
I do note that Pat Buchannan (whatever) is anti-Israel but he's a long standing right wing fool who recently wrote a book blaming Poland for the Nazi invasion 9/39. I kid you not. You can't control everyone in you party and you are not responsible for each one's opinions, but your party is pro-palestinian and you could easily learn this with just a few hours of googling.

It may be generalizing to characterize the left as pro-Palestinian, but it's not a big stretch. I've never met a single person I'd consider a righty who you'd call pro-Palestinian, yet every single pro-Palestinian/Hamas apologist I know of would be considered a lefty, to one degree or another. That's not to say that some of my own left-of-center friends don't go the other way on the issue, but generally speaking, I think this is one of the biggest unbridgeable gaps between left and right.

I agree w/ your analysis but I suggest there is a significant number of "lefties" who do not support Hamas and who "go the other way" on th eissue.

If by "significant number" you mean less than one third of the lefty population, I would agree with your characterization. I will post some thoughts about the pro-Israeli rally I attended on Sunday. Sorry it's taking so long.