This Day in the History of Victories in Unnecessary, Poorly Planned Assaults 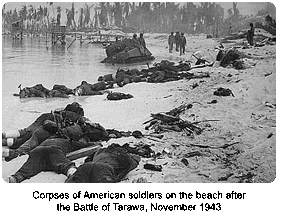 On this day in 1943, U.S. Marines seized control of Tarawa and Makin atolls from the Japanese. It had been a rough three day battle for the Marines who had killed all but 17 of the islands' Japanese defenders, once numbering 4,600, but it had cost the Marines 3,000 casualties because the Higgens boats were sent at low tide and ran aground on the reef 500 yards from the beach. Very few Marines were able to get out of the boats, not drown and walk neck deep to shore under withering Japanese fire. The second wave only got about half of it contingent ashore and the Marines held at the end of the first day a very narrow strip of sand about 100 yards long. The Japanese held out for two more days, causing horrendous casualties to the last and then waged a Banzai wave attack which was barely held off by the surviving Marines. This group of islands could have easily been bypassed thus making the costly lesson completely unnecessary. Worse, the validity of the lessons learned only lasted a year or so until the Japanese changed tactics and allowed the invading forces to land unopposed but then slaughtered them inland. A monumental waste for which few heads rolled.