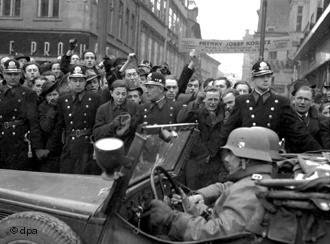 On this day in 1938, Nazi forces occupied western Czechoslovakia, the so-called Sudetenland, from which base, within 6 months, they would expand to take over all of Czechoslovakia, and within two years, most of Europe. It's rarely a good idea to appease a tyrant.
Do those raised arms look like proper Sieg Heil salutes to you?

Comments:
Britain’s Prime Minister Neville Chamberlain’s weak statesmanship plus french distate for more human losses after what had happened in WW1 and influential British groups like The Oxford Union who said...

“we vow never to fight for king and country”

... are what set the stage - but Hitler was pretty amazed actually how straightforward his initial planned conquests were saying...

“If the French had marched into the Rhineland we would have had to withdraw with our tails between our legs”.

Just goes to shw what happens if you don't stand up to a bully...

I've posted on the Rhineland French wimpiness in the past. Just show up and Hitler is toast. The French wouldn't do it, and eventually they suffered some. Poland refused to compromise, stood up to Hitler and took it in the shorts, with the next longest occupation (after CZ et al) and several million citizens murdered. Aint life grand?