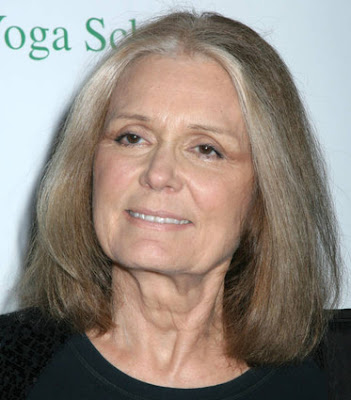 Gloria Steinem, the fading rose of the shrinking lefty feminism movement, who once said, famously, a woman needs a man like a fish needs a bicycle, before she married a man, wrote yesterday about her sister, Governor Sarah Palin, saying, inter alia, that "Palin shares nothing but a chromosome with Clinton."
No, Gloria. Men have xy and women xx, so Governor Palin actually shares two all of her chromosomes with Senator Clinton.
Oh and when did "reproductive freedom" become the euphemism for abortion? Wouldn't reproductive freedom be something the Chinese, limited by their government to a single child, yearn for? Wouldn't it be freedom to have a child rather than freedom to kill the foetus because raising him or her (or even bringing him or her to term and putting him or her up for adoption) is too hard or is merely inconvenient? I don't support criminalizing abortion, but I know it is not a treasured constitutional right. Ms. Steinem, apparently, doesn't know squat.

(h/t James Taranto, who reminded me of this basic biological fact)
UPDATE:
Gloria also said Governor Palin was out of touch for these beliefs

[Palin] opposes just about every issue that women support by a majority or plurality. She believes that creationism should be taught in public schools but disbelieves global warming; she opposes gun control but supports government control of women's wombs; she opposes stem cell research but approves "abstinence-only" programs, which increase unwanted births, sexually transmitted diseases and abortions; she tried to use taxpayers' millions for a state program to shoot wolves from the air but didn't spend enough money to fix a state school system with the lowest high-school graduation rate in the nation; she runs with a candidate who opposes the Fair Pay Act but supports $500 million in subsidies for a natural gas pipeline across Alaska; she supports drilling in the Arctic National Wildlife Reserve, though even McCain has opted for the lesser evil of offshore drilling. She is Phyllis Schlafly, only younger.

Eugene Volokh shows here that it is Ms. Steinem who is out of touch with the majority of Americans. Who could have guessed that? Here are but a few of the opinions of Americans in some of the areas mentioned.
58% of women support private right of the Second Amendment.
82% of people, including, obviously, women, support teaching creationism or intelligent design either alone (27%) or alongside evolution (55%).
Only 40% of women support abortion if the abortion is merely "to end unwanted pregnancy" and not to save a woman's life et al.