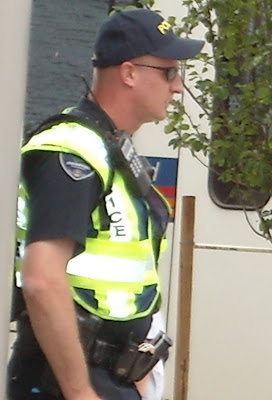 I can see why the protesters are angry. I took a very long walk to the freedom of speech zone. Here are the images from along the way. 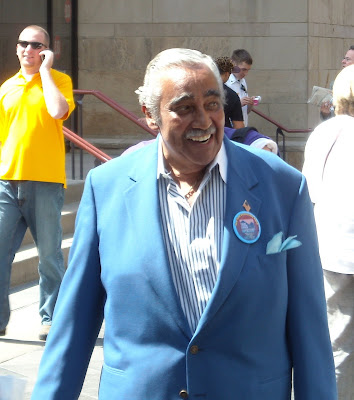 Here is a non Denver policeman in Denver directing the clueless delegates towards the Pepsi Center about a mile and a half away.

Charlie Rangel (D-NY) has plenty of time on his hands as he was not asked to speak at the Convention. Seemed like a nice enough guy.

Larimer Street, the old part--where the winos were during the Jack Kerouac period, is all decked out for the states' delegates. Good that they hung the U.S. flag properly. 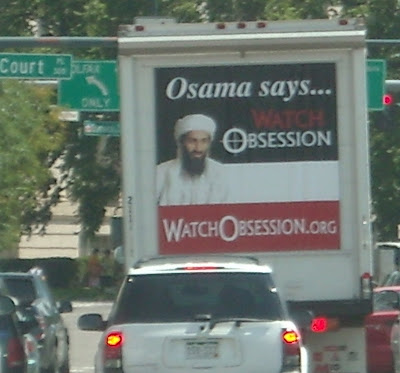 I've see Obsession. I don't think Osama wants us to watch it. 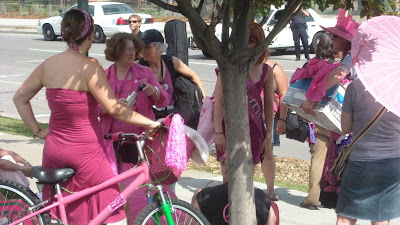 The Code Pink ladies prepare to decamp from the Freedom of Speech zone and do their pointless protest of whatever it is they protest elsewhere. Nearly all that didn't walk used pink bicycles. Nice touch that. I took a photo (on their camera) of two Pinkies holding a banner about half a mile from this spot. I guess they were lost but at least could see the Pepsi Center from there. I have no memory of what the banner said.

Here at Speer and Arapahoe, just outside a check in gate to the Pepsi Center, there was a religious, anti-abortion rally with about 30 people. I spoke there with former Speaker of the Colorado House John Andrews who hosts Backbone radio on Sundays at 5:00 pm (KNUS--710 AM). He was friendly until I admitted that, although I'd seem him at Republican events, we hadn't actually met before. Then he was a little more formal. Perhaps he thought I was impertinent to use only his first name. He's giving fellow Colorado blogger (and candidate for the Colorado House--District 6) Joshua Sharf his credentials, so be sure to check out View from a Height over the next few days for a look inside fortress Pepsi Center. 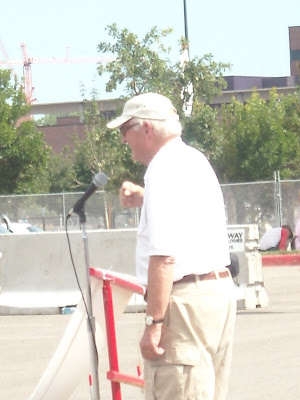 Here we are in the promised land, the Free Speech Zone. This tourist was the only guy I saw use the microphone in the time I was there. He and his wife and friends couldn't believe that the place was so dead and empty. 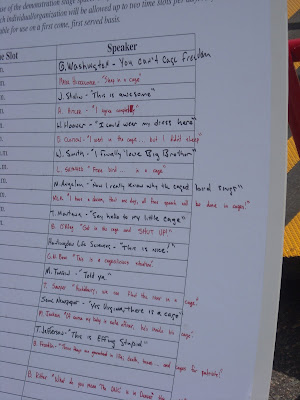 Here is a satirical list of speakers near the microphone. Not bad. 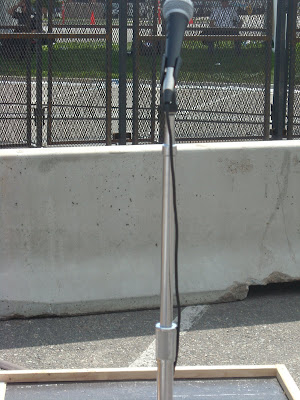 Of course, as the final photo shows, you're about half a mile from the site of the convention (the long black thing above the white tent to the left is the roof of the Pepsi Center) and you can't see any delegates and they can't see you; so all is not Nirvana in the Freedom of Speech zone. I'm willing to bet that none of the looney lefties who spoke and rallied yesterday will use this oasis of rights, but where will they exercise their right of free association? Time will tell.

I think this is where the horrible concert venue, City View? City Lights?, whatever,was a few years back. 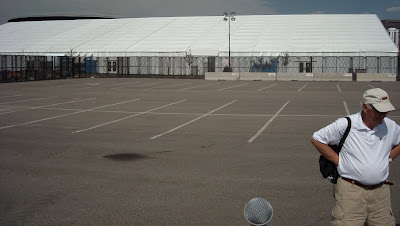 Comments:
I wonder who wrote that list. It was pretty good. That's a shitty situation; I'm glad no sucker is falling for that b.s. Speak where you gotta, you don't need a cage!

On this we agree.