This Day in the History of Political Forks in the Road 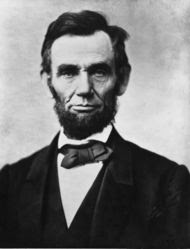 On this day in 1860, Abraham Lincoln was elected U.S. President and the country was on its way inexorably to a bloody civil war. Lincoln, the first Republican President, defeated three other candidates (John C. Breckinridge, John Bell and Steven Douglas), but he received less than 40% of the total popular vote, very little of it in the South which was solidly Democrat.