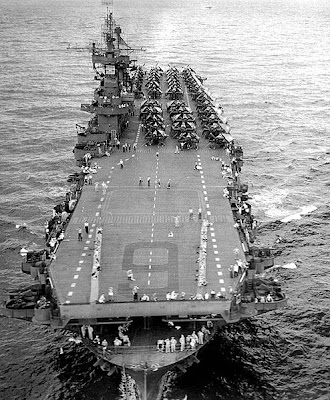 On this day in 1941, the aircraft carrier USS Enterprise, our main line of defense in the Pacific during the first part of the war, departed Pearl Harbor in order to deliver F4F Wildcat fighters to Wake Island. The Lexington did the same at Midway. Elsewhere, the Langley was in the Philippines; the Saratoga was near San Diego: the Ranger was in the Caribbean: the Yorktown was in Newport News; and, the insect named Wasp and Hornet were also stationed in the Atlantic. So none of our 9 carriers were in Pearl 9 days later. Whew!
On December 7, 1941, Japan had 8 large carriers. By September, 1945, we had 28 large carriers, Japan had none (although 3 actually survived the war, damaged and obsolete).
Don't tread on us.

Comments:
What a wonderful picture of the Big E, the greatest ship in American history, and nobody else comes close. She was delayed getting back to Pearl on 12/7/41 because of a bad storm, a storm that changed history. The fact that E fought in so many battles and survived, when the other great carriers didn't is amazing. I once read that from the time she was built the Enterprise crew could beat all of the other crews in just about any sport, they were just super competitive and superdisciplined.

After the war, the bastards broke her down and sold her for scap, but her nameplate is still preeserved in a park in River Vale New Jersy, and I think her bell is at Aannapolis. They only ring it when they beat Army.

Cool info, Pete. I recalled you were interested in the Pacific Theater and a big fan of the Big E. We were lucky not to have any carriers in Pearl Harbor on the 7th, but we were not going to lose that war under any circumstances short of Japan beating us to the atomic bomb.

For contemporaneous news stories of the "Galloping Ghost of the Oahu Coast", take a look at this page.