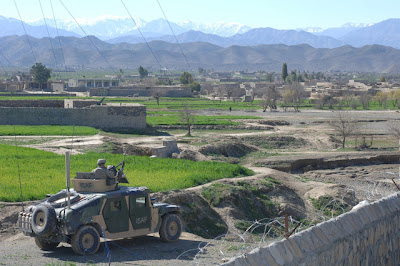 It failed because the Tommies killed many of the competent battlefield leaders last year and the Taliban has not as yet been able to replace them. So says UK Telegraph reporter Thomas Harding. Money quote: The Taliban's much-vaunted spring offensive has stalled apparently due to lack of organisation after dozens of middle-ranking commanders were killed by British troops in the past year, according to military sources.

But of course this war doesn't really exist; it is merely an ideological doctrine, a bumper sticker slogan for President Bush's destruction of America's ability to defend itself. So says one term NC Senator and failed candidate for Vice President last election, the renowned global strategist, John Edwards. Of course Edwards voted for the Authorization for Use of Military Force Against Iraq Resolution of 2002 and the Authorization for Use of Military Force passed in 2001 specifically to allow us to wage war against al Qaeda, and its host, the Taliban, in Afghanistan; but consistency never was that ticket's strong suit.
The photo is from Black Five, a superior milblogging site.

Comments:
I'm glad I went double or nothing on the brakes. That was a close one.

Yeah, I got stuck in the technology of the 70s there. I think we're winning in most of Iraq and Afghanistan, although it will be, to use Don Rumsfeld's words, a long hard slog. Thanks for the comment.

We are not winning in Iraq. I will have a very good post sometime in the next week or so with 502 info that will make you bleed green with envy.