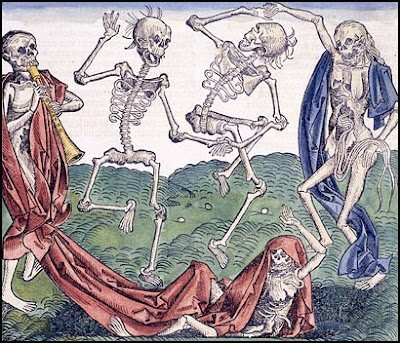 Showtime's series on Henry VIII getting rid of Katherine of Aragon for Anne Boleyn, called The Tudors, is not great in the opposite way that Rome and The Wire were and are great. I can't put my finger in what's missing, but something is, perhaps a lack of vision in the directors. Still I watch it.

Sunday before last they had some characters die of the Sweating Sickness. Boleyn got it but survived. Henry's gay, or at least ambisexual, entourage member, William Compton, died of it as well as one of the cute, loose sister ladies in waiting. But what was it?

Nobody really knows. It apparently occurred mainly in England hundreds of years ago. It is distinct from the tick borne bovine disease of the same name extant today. It hit, usually in the summer, in 1485, 1507, 1517, 1528 (a big epidemic), and 1551 and hasn't really been back since. Its symptoms included a general apprehensiveness followed by sudden headaches, myalgia, fever, profuse sweating, abdominal pain, vomiting, heart palpitations and dyspnea, which wore the victim out trying to catch a breath. There was nothing reported on the skin--no buboes nor rash. It could apparently kill you in a matter of hours. Sometimes most of the victims were male, other times they were mainly female.

It sounds a little like Hantavirus pulmonary syndrome except for the fact that you could get it again and again and it wore you down to death. Viruses don't generally do that. If you survive, it means your body created enough anti-bodies to kill a full blown infection; wouldn't there be enough to prevent another? It could be an anthrax caused pulmonary prodrome except the doctors then were sure there was human to human transmission. That's not anthrax. It could have been relapsing fever, from a tick or louse bite, and people missed the big scab around the bite and the rash that sometimes accompanies it. Seems unlikely though. Would have been a very virulent form then.

Maybe it's still out there, killing earthworms or 17 year Cicadas or voles or shrews, waiting to cross over to humans again. It's been quite a wait, though.

Labels: Plagues of the Past